With a hard-fought win over Newcastle, Liverpool reduced the distance on Premier League leaders Manchester City. Mohamed Salah scored his 22nd goal of the season.

Jurgen Klopp's squad fell behind early on against their struggling opponents as Jonjo Shelvey scored against his previous club following a rapid break, despite the absence of Virgil van Dijk and Fabinho due to suspected positive coronavirus tests.
Also Read: Premier League: Arsenal in top four, beats West Ham United by 2-0

Liverpool, on the other hand, took command after scoring two goals in the span of four minutes.
Also Read: West Indies vs Pakistan ODI series postponed after new COVID-19 cases emerge
Diogo Jota's equaliser was controversial since it occurred when Isaac Hayden was down in the six-yard box with a head injury, but the Portuguese took advantage of the situation by tucking in on the rebound after Martin Dubravka's first save. 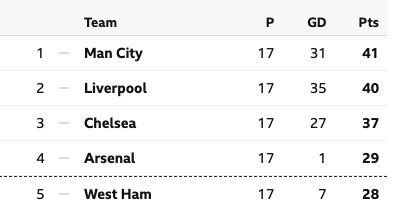 Shelvey then undone his good start by passing to Sadio Mane, who forced another save from Dubravka before Salah scored.

After the interval, Eddie Howe's side improved as the hosts relaxed, and went near via Jacob Murphy and Shelvey, but Trent Alexander-late Arnold's effort from 25 yards finished the game, and Liverpool are now a point behind Manchester City.

Newcastle is still in 19th place in the table, three points from safety, and their mission of avoiding relegation will be made even more difficult when they face Pep Guardiola's league leaders on Sunday.