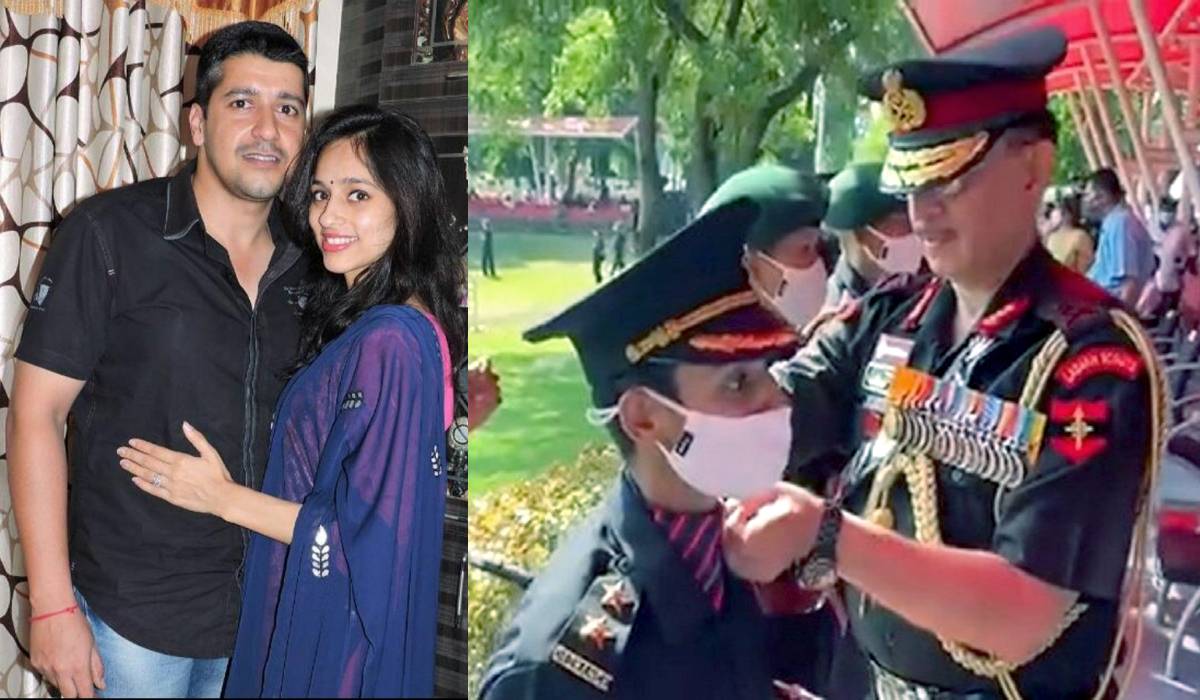 Major Vibhuti Shankar Dhoundiyal made a supreme sacrifice at Pulwama in 2019 and he was awarded SC(P). His wife Nikita Kaul on Saturday,  May 29, passed out of the Offices Training Academy and joined the Indian Army to serve the nation and paid befitting tribute to her martyr husband.

A proud moment for her as Lt Gen Y K Joshi, himself pips the stars on her shoulders!”

Kaul will join the force as a Lieutenant.

Major Dhoudiyal and Nikita Kaul were married just nine months before his sad demise. But his loss does not go in vain as his wife made a strong decision to join the Indian Army and made her husband proud.

Just after six months of the Pulwama attack, Nikita filled the Short Service Commission (SSC) form and cleared the exam as well as the Services Selection Board (SSB) interview.

She was then commissioned at the Officer Training Academy (OTA) at Chennai and on May 29 she officially joined the India Army as Lieutenant Nikita Kaul Dhoundiyal.

"I've experienced the same journey he has been through. I believe he's always going to be part of my life", she said.

Who was Major Vibhuti Shankar Dhoundiya?

34-year-old, Major Vibhuti Shankar Dhoundiya was posted with the 55 and was martyred just a few days after the Pulwama attack in 2019, an attack that intensified tensions between India and Pakistan. Major Dhoundiya was killed in a gun battle with the Jaish-e-Mohammad (JeM) terrorists a few days after a car bomb strike in Pulwama took the lives of about 40 paramilitary Central Reserve Police Force personnel.

Major Dhoundiyal was the youngest and the only son out of the four siblings. His father worked as a controller defence account officer, who died in 2012. In 2011, Dhoundiyal became a part of the Indian Army and had spent most of his service years in Jammu and Kashmir.

Dhoundiyal had married Kaul, a Kashmiri Pandit in April 2018, and the two were married for 9 months before his martyrdom.

He Will Always Be Part of My Life: Kaul

Kaul while speaking about her achievements said that she could make her dream come true with the support of her family and that her late husband will always be part of her life.

“The journey has been marvellous, and I believe my journey has just started. The last 11 months have made me learn so many things in my life, and I would like to thank everyone who had faith in me – my mother-in-law, my mother, who have also been a part of my journey. I probably would not have done it without you guys,” she said.

Speaking of her late husband Major Dhoundiyal, Kaul said: “I believe it’s a parallel world. The day I stepped in, I imagined and I felt that I am travelling through the same journey that he has travelled through. I believe he is always going to be a part of my life. Even today, he is somewhere around, looking at me and I can feel (it); he is saying that ‘you just did it. I love you, Vibhu!”

Sending out a message to her well-wishers, she said: “Please have faith in yourself. There is absolutely nothing that can stop you from achieving what you have aimed for. Just have faith. Jai Hind! Be safe!”

Many took to social media from common people to politicians to pay tribute to Kaul calling her the epitome of inspiration and determination. 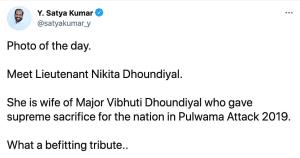