The great majority of supporters oppose combining sports and politics and want the event to proceed as planned. 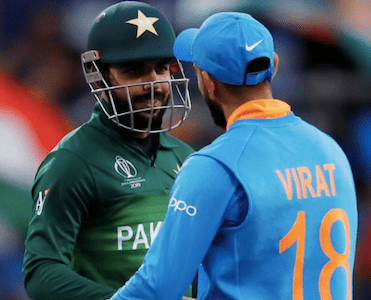 With only two days left till the T20 World Cup encounter between India and Pakistan, the buzz around the match has grown rapidly on various social media platforms — but not all of it is pleasant.

In the light of recent deaths of innocent people in the union territory of Jammu and Kashmir, some Indian supporters are calling for a boycott of the match.
Also Read: Watch: Jasprit Bumrah, Mohd Shami among other Indian cricketers taking up Squid Game Challenge
However, the great majority of supporters oppose combining sports and politics and want the event to proceed as planned.
Also Read: T20 World Cup: Scotland cruise into Super 12 with an emphatic victory
While Indian supporters remember playing against Pakistan with fondness, their Pakistani counterparts are still tormented by all of their losses in World Cups (both ODI and T20I) during the previous two decades.
Both sides have met five times in the T20 World Cup, with India winning each time. All of those triumphs came under MS Dhoni's guidance, but he has resigned from international cricket, leaving Virat Kohli to continue India's undefeated streak. Kohli has chosen to step down as T20I captain after the tournament.
Despite India's winning record, Pakistani fans gather behind their side before each new match, hoping for a different outcome. The last time these two teams met was during the group stage of the 2019 ODI World Cup, when India won convincingly in a rain-shortened match in Manchester.
Following the game, a slew of memes depicting Pakistani supporters expressing their dissatisfaction with their team's lacklustre performance went popular on social media. Momin Saqib, a British-Pakistani influencer, was the subject of one such meme that went viral.
His legendary "Maaro Mujhe Maaro" outburst had catapulted him into stardom overnight. As he criticised Pakistani players' poor fitness levels and questioned their eating habits, Pakistani supporters empathised with his dismay.
The video was a tremendous sensation not just in Pakistan, but also across the border, with fans enjoying Saqib's comical slamming of his own team after yet another loss.

Saqib has shared another video on his Instagram account, this time expressing his enthusiasm for the forthcoming match between India and Pakistan, more than two years after the defeat.
He can be heard saying in the video that there are only two major cricket matches: one between India and Pakistan and the other with Aamir Khan in Lagaan. He concludes by emphasizing that Pakistan must win this match at all costs.
Both nations' supporters crowded the comments area, attempting to troll each other. While Indian fans were confidence in Virat Kohli's team's ability to preserve their undefeated streak, Pakistani fans depended on their prayers, rather than their players' abilities, for their team's good fortune. The sadness in Saqib's voice is still there with more than two years after the 2019 World Cup loss.
India will play Pakistan in the T20 World Cup opener in Dubai on October 24, and will be seeking for their sixth straight victory over their bitter rivals in the tournament's history.