This year, the pair will mark their first wedding anniversary on December 17th. 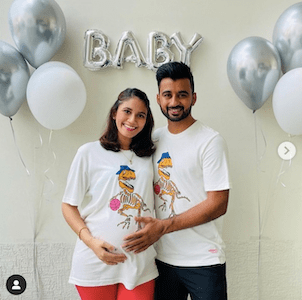 Manpreet Singh, an Indian hockey Olympian, revealed the couple's pregnancy on Friday by posting a photo of his Malaysian wife Illi Najwa Saddique standing alongside him and revealing her baby belly. 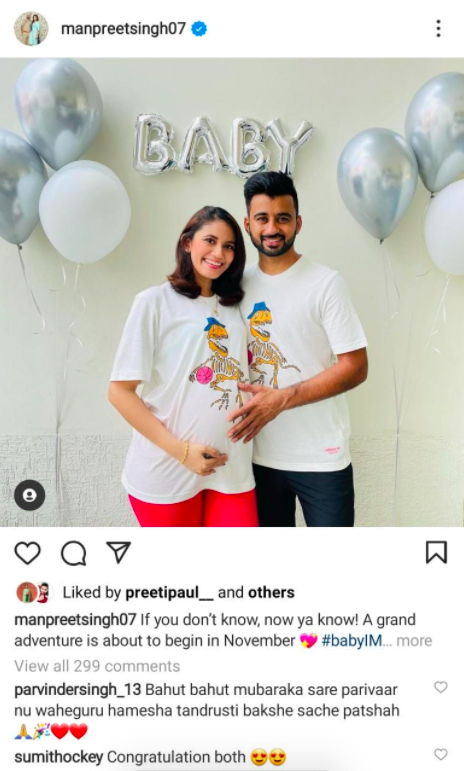 Manpreet made the announcement on Instagram this evening. “If you don’t know, now ya know! A grand adventure is about to begin in November.” The pair organized their photo session by wearing the sam
e T-shirt. The word ‘Baby' was printed in the backdrop, and silver and white balloons were hung on the wall.
Also Read: Smriti Mandhana Becomes First Indian Woman to Hit a Ton in Pink-Ball Test, Named ‘Goddess Of Offside’
Mom-to-be Illi in response to the post said,  “I have been MIA (Missing in Action) around here lately coz we are pregnant! Our little pumpkin will be arriving to our patch in November #babyontheway”.
Also Read: Winning Hearts: Ishan Kishan and Sachin interacting feels like a principal talking to his student

“I have been MIA (Missing in Action) around here recently because we are pregnant!” said mother-to-be Illi in response to the post. In November, our tiny pumpkin will arrive at our patch #babyontheway.”
This year, the pair will mark their first wedding anniversary on December 17th. After an eight-year relationship, they tied the knot in a Jalandhar gurdwara. Illi initially met Manpreet in 2012 as a spectator while watching him play hockey in Malaysia. Manpreet's family has given Illi, who has Pakistani ancestors, the Punjabi name Navpreet Kaur after their wedding.
Manpreet, who is from the now-famous town of Mithapur, has been in Jalandhar spending time with his family, friends, and meeting new people since bringing glory to India as the skipper of the Indian hockey team by earning bronze at the Tokyo Olympics in August this year. When he came home to a hero's welcome, his wife was not present. She had indeed communicated with the media through video conference from Malaysia.