PM Modi, in an emotional tone, repealing farm laws on the day of Guru Purab shows BJP is on its 'A Game' for state polls. 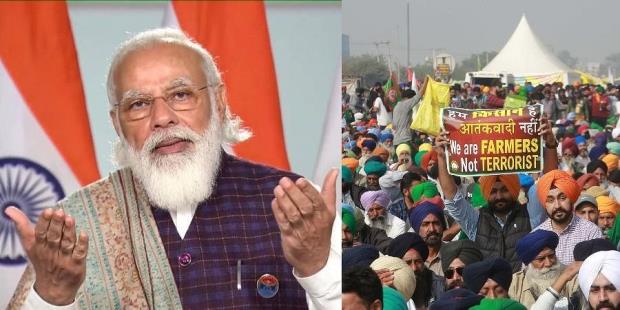 Prime Minister Narendra Modi today announced the repealing of three controversial agriculture laws which had led to a year-long farmers’ protest. The decision comes just months ahead of Punjab assemble elections, which indicates the move is for the “welfare” of BJP, not Annadatas.

With its continuous winning strokes in Punjab, first Kartarpur corridor reopening and now repealing of farm laws, BJP has revived its chances in upcoming state elections. PM Modi in an emotional tone, making the big announcement that too on the day of Guru Purab shows BJP is on its 'A Game' for state polls.

Punjab has a total of 117 assembly seats. There are 40 in the city, 51 in the suburbs, and 26 in the countryside. In both rural and semi-urban assembly seats, the farmers' vote bank determines whether they win or lose. In such a situation, BJP had no choice but to repeal the law before the Punjab elections.

Punjab is divided into three regions: Malwa, Majha, and Doaba. In Malwa, there are a total of 69 seats. Malwa has a majority of rural seats, which are dominated by farmers. This region is crucial to the formation of Punjab's government.

Significance of agriculture in Punjab

Punjab's economy fully depends on agriculture. Punjab's agricultural and industrial sectors are intertwined. As agricultural practices enhance, the market for agricultural goods and machinery such as tractors expands.

The agricultural sector employs over 75 percent of the people in Punjab, directly or indirectly. Farmers, labourers working in their fields, traders who buy their crops, along sellers of fertiliser and pesticides are the people directly involved in the sector.

An attempt to appease Sikhs

Guru Purab also known as Guru Nanak Jayanti, is a festival widely celebrated by the Sikh community across the world. It is one of the most sacred festivals for Sikhs as it marks the birth anniversary of Guru Nanak, who established Sikhism.

The announcement was made on Guru Purab to establish an emotional connection with the Sikh community in Punjab. Notably, about two days ago, on November 17, the Modi government reopened the Kartarpur corridor for pilgrims.

The corridor provides a visa-free entry to Indian pilgrims to visit the Kartarpur Darbar Sahib (resting place of Guru Nanak Ji) in Pakistan.