Prime Minister Narendra Modi and his Australian counterpart Scott Morrison met in Washington ahead of the Quad Summit to discuss their countries' bilateral relations, especially defence partnerships given their importance as bulwarks of democracy in the Indo-Pacific region. 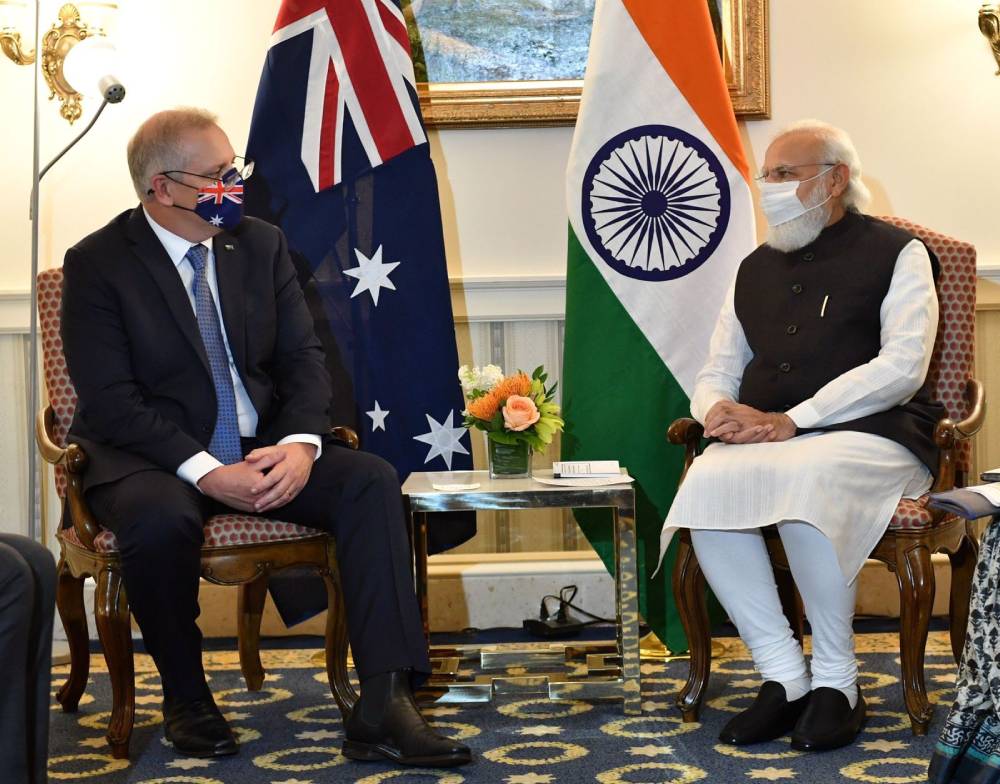 Prime Minister Narendra Modi and his Australian counterpart Scott Morrison met in Washington ahead of the Quad Summit to discuss their countries' bilateral relations, especially defence partnerships given their importance as bulwarks of democracy in the Indo-Pacific region.

Speaking to reporters after their meeting on Thursday, Morrison described Modi "a dear friend and great friend of Australia" and said, "We had a very good discussion about our defence partnerships. That was particularly progressed at the most recent 2+2 meeting of defence and foreign ministers."

This was the first in-person meeting of the two leaders in the post-pandemic period, although they had held a virtual meeting in June.

They will be meeting again on Friday with President Joe Biden and Prime Minister Yoshihide Sugo of Japan at the Quad summit.

Morrison disclosed that he had spoken to Modi the night before the announcement last week of the tripartite defence pact between Australia, the UK and the US (AUKUS), which will have an impact on the Indo-Pacific region.

He said that there was "keen interest" in AUKUS and the plan to deploy a fleet of nuclear-powered submarines "from our partners in India, and well-received. And looking forward to see how that continues to progress."

The US announced last week that it was going to provide Australia with nuclear-powered submarines.

An Indian Ministry of External Affairs readout of the Washington meeting said that Modi and Morrison reviewed the progress of the Comprehensive Strategic Partnership of their countries since the June encounters "and resolved to continue close cooperation for mutual well-being and towards advancing their shared objective of an open, free, prosperous and rules-based Indo-Pacific region."

The readout said that they "expressed satisfaction" on the progress towards a bilateral Comprehensive Economic Cooperation Agreement (CECA) and noted their commitment to "achieve an early harvest announcement on an interim agreement" by the end of the year.

Morrison said that Australia's Trade and Investment Minister Dan Tehan and India's Commerce and Industries Minister Piyush Goyal will be meeting in New Delhi next week and added, "Prime Minister Modi and I tasked our teams to be ambitious when they sit down next week to look at our trade opportunities, particularly in the area of digital trade arrangements."

With a view to fighting climate change, he emphasised cooperation in clean energy and low-emissions technology.

"At our meeting today we agreed to go forward with a low emissions technology partnership, a partnership that will focus on hydrogen development, ultra-low-cost solar programs, to support their energy transition," he said.

"We'll work together closely with our good friends in India, to work with the comparative advantages that Australia has, particularly in the area of hydrogen, and working together with their manufacturing capabilities so they can realise that in their own country," he added.

Another area they dealt with was cooperating to ensure the reliable availability of critical minerals, which are especially important for the hi-tech sectors.

Morrison said, "Prime Minister Modi and I share a passion around that project, because they are also involved in that supply chain at various different points, and it's important that we have the choice that exists in world markets around these issues. We want to play a stronger role here."