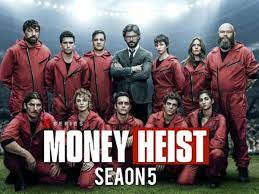 Netflix has announced the release date, or rather, release dates for the fifth and final episode of La casa de Papel. This season would be split into two parts with five episodes each. Money Heist Season 5 ‘Volume 1’ would premiere on September 3 and ‘Volume 2’ would start towards the end of the year on December 3.

This time it is beyond robbery, the gang is back with more firepower and anger. They haven’t forgotten Nairobi’s sacrifice. The teaser is full of happy and sad moments. There is a lot of action in the teaser, A LOT!

Money Heist creator Álex Pina in a statement said, “When we began to write Part 5 amid the pandemic, we felt that we had to change what was expected from the ten-episode season and used every tool we could to create a sensation of a season finale or series finale in the first volume itself. We decided to work in an extremely aggressive genre, putting The Gang on the ropes.”

“In volume 2, we focus more on the emotional situation of the characters. It is a journey across their sentimental map that connects us directly to their departure.”

Also Read: Shocking: When Priyanka Chopra revealed about a possible 'lesbian encounter’ with someone KJo knew

“The gang has been shut in the Bank of Spain for over 100 hours. They have managed to rescue Lisbon, but their darkest moments are upon them after losing their own. The professor has been captured by Sierra and for the first time, doesn’t have an escape plan. Just when it seems like nothing else could go wrong, an enemy comes on the scene that is much more powerful than they have a face. The end of the greatest heist in history is approaching, and what began as robbery will turn into a war.”