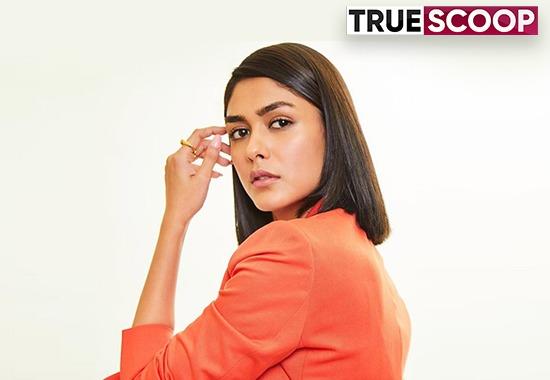 Super30 actress Mrunal Thakur is all set for her comeback on the big screen with her upcoming project. She will be seen in Gowtam Tinnanuri's directorial Jersey. Jersey is a movie based on the life of a failed cricketer who returns to the game in his late 30s. The movie stars Shahid Kapoor and Mrunal is playing the role of the actor's wife in the movie. It is the remake of the Telugu film named the same.
The team is all set for their promotions. In a recent promotional event, the actress shared her initial days experience in the Industry. Mrunal started her career in the Television industry. She said she cried a lot in her initial days for the way she was treated. She said when she went back home, she break down and complained to her parents about it. She also spoke about her parents, encouraging her not to give up and setting an example for others who are struggling.
Mrunal made her Bollywood Debut in 2019. She was cast in Super30 opposite Hritik Roshan. She also worked in the action film Batla House alongside John Abraham. Recently, she was seen in the sports drama Toofaan.
Mrunal started her acting career with a Television serial 'Mujhse Kuch Kehti... Yeh Khamoshiyaan'. Then she signed Zee TV'S show 'Kumkum Bhagya' in 2014. She left the show in 2016 and took retirement from the Television industry.
Mrunal has also worked in the Netflix web series Dhamaka co-starring Kartik Aaryan. She also worked in three music albums Gallan Goriya by Dhvani Bhanushali, Bad Boy X Bad Girl with Badshah and Aise Na Chhoro with Guru Randhawa.
Also read: Latest Entertainment News: Here are the top 5 OTT-released Hindi movies & shows of 2021
Mrunal now made her debut on all the platforms including Television, Big Screen and Music albums too. Mrunal's upcoming movie is Jersey co-starring Shahid Kapoor which was initially scheduled for release on December 31, 2021, but due to covid crises, the dates are postponed for an indefinite period.