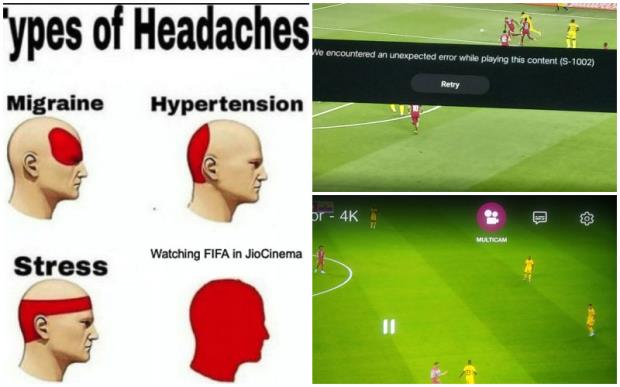 The Football World Cup has started. The opening match was played between hosts Qatar and Ecuador on 20 November. Sports 18 is telecasting this match in India, while on the OTT platform it can be seen on Jio Cinema. In the first match, Indian viewers who were watching the match via online streaming were troubled by the buffering. On this, the audience trolled Jio Cinema on social media.

Users trolled Jio Cinema through various memes. However, after this, Jio Cinema also jokingly apologized to the users by sharing the TikTok video and told them that their team is trying hard to resolve the buffering issue.

Jio Cinema said through social media that we are constantly working to give you the best experience. Please upgrade your app to enjoy FIFA World Cup Qatar 2022. Sorry for any inconvenience caused.

The user shared a photo on social media and wrote that this is the worst start ever for the World Cup broadcast. Below this, he shared the headache meme picture trolling the JIO’s services.

Watch Some of the Memes Here:

Ambani to all trying to watch FIFA on Jio Cinema and sports 18 pic.twitter.com/HnF57vVhRQ

Rs 600 for a #Voot subscription, only for the service to de-list the tournament after showing its listings for months.
Meanwhile, #JioCinema has the most horrible live telecast experience ever.

Am I the only one who feels cheated?#FIFAWorldCup #QatarWorldCup2022 #WorldCup

The FIFA World Cup 2022 started in Qatar on Sunday 20 November. 32 teams are participating in the world's biggest tournament in terms of viewership. It is the third-largest tournament in the world in terms of prize money. Above this, the prize money is more in UEFA Champions League Football (10.6 thousand crore rupees) and Formula-1 Motor Sports (6.5 thousand crore rupees).

The opening match was played between the hosts Qatar and Ecuador. The host lost to Ecuador by 2-0. Both goals were scored by Ecuador's captain and striker Ener Valencia.