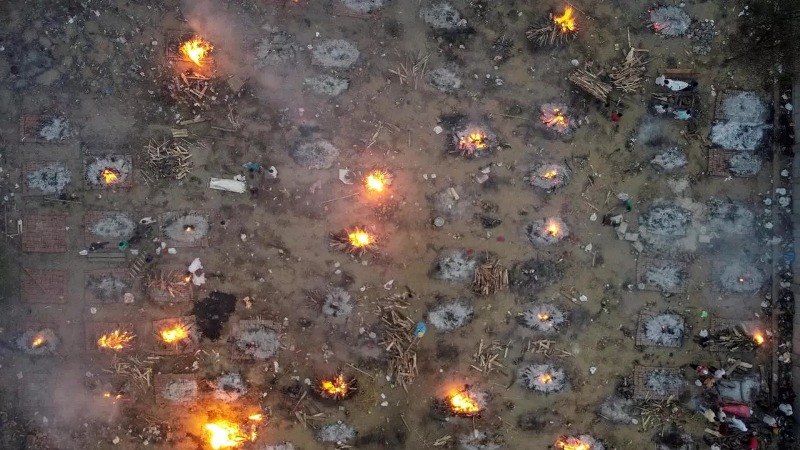 India, one of the largest nations in the world with a wide range in wealth levels in its people who are spread across many states and union territories in a more or less decentralised system of governance is facing a credibility crisis in addition to the pandemic which is relentlessly devastating family after family.

Talking about the novel Coronavirus, India is under the second wave and the rate of infections and the deaths due to same has overwhelmed the nation’s health and last rites infrastructure.

The hospitals, both state-run and private, are occupied beyond their capacity, oxygen – which is critical for the survival of the patients – is running low all across the country, patients breathing their last outside hospitals waiting for a doctor – India has a grave situation on its hands.

Further, as the article by New York Times claims, there is a high probability that the number of deaths exceeds what is being reported by the government authorities.

The Indian government reports more than 3 lakh new infections per day and this is almost half of the new infection cases all over the world.

Scared, may be people should be

Experts opine that the nation was doing well in its handling of the pandemic and this caused the people to lower their guard.

But now, the piece by New York Times claims that millions of Indians are so scared of the pandemic that they are refusing to step outside their homes.

The sudden surge in the devastation by the pandemic in India is believed to be because of a new variant - B.1.617. This variant, experts believe, is not only fast spreading but also difficult to control.

This is so because the new mutation contains genetic signature which is also found in two other difficult-to-control mutations. One of these is the one that ravaged California earlier this year and the other one is the South African variant.

Vaccination drive nothing to write home about

To make a worse situation even more difficult to salvage, the nation’s vaccination drive is limping along.

The story by New York Times claims that even less than 10% of Indians have got single dose of the vaccine. This fact stands in the background of the nation being one of the leading vaccine manufacturers in the world.

A side effect of the deteriorating condition in India is that poorer nations to whom India had promised millions of doses are now basically left high and dry.

Though, the nation is at the receiving end too with nations like USA and China refusing to supply raw material required for the production of the vaccines.

There are reasons that a common man in India is forced to consider the possibility that their elected government may be cooking the books as far the pandemic crisis is concerned.

The experts too are worried that the numbers which the government is reporting, though horrendous in themselves, may possibly represent only a fraction of the actual victims.

Also read: A special tribute to Irrfan Khan and Bhanu Athaiya at Oscar 2021

Further, the photographs of crematoriums and cemeteries all over the nation being published by national dailies are screaming in the face of sanity – how can these piles of dead bodies not be accounted for in the records of the government?

The government’s claim is of deaths due to Covid around 2 lakh and the number of deaths per day around 2,000.

Ground reality at crematoriums and cemeteries of India

Bhopal was the site of a devastating gas leak and the incident cut short the lives of thousands of individuals. The cremation grounds of the city claim that they have not been as busy as they are now since that disaster.

Taking about specifics, over 13 days in mid-April, the officials of the city reported 41 Covid deaths. However, a survey of the crematoriums and cemeteries revealed a total death count of more than 1,000 during the same period.

The question then arises could the contribution of Covid in the deaths be less than 5%?

A doctor in Bhopal claims that many deaths are not being recorded because the officials do not want to create a panic. The doctor further claims that the number of deaths is increasing daily.

A similar pattern was observed in other places including Uttar Pradesh and Gujarat.

Indian dailies have conducted their research and their published findings corroborate the notion that a serious underreporting of the extent of infections and deaths due to Corona is being undertaken.

The reasons for this are many. The government may be operating under a political interest to portray an image of order and progress in the handling of the pandemic. This could explain the authorities not writing the cause of death as Corona for dead bodies where applicable in a cremation ground in Gujarat.

The hospitals too appear to be playing a willing role in suppressing or misrepresenting information. The piece by New York Times claims that a private hospital fudged the cause of death from Corona to “sudden cardiac death” because the reason was oxygen supply suddenly dropping for Covid patients. What could be the motivation for a private hospital to do so?

The family members and relatives of the deceased too sometimes shy away from labelling their lost one as one dying from Corona to avoid the strict Covid guidelines for last rites. Further, some people may harbour a guilt that they lost a family member because something was lacking in their care.

Get the latest update about Live, check out more about Fitness, Covid, English & Uttar Pradesh and Gujarat