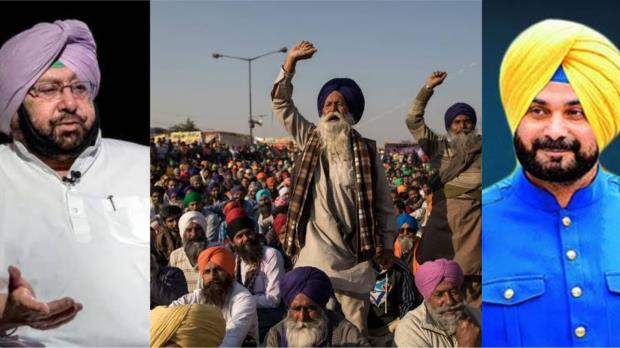 The day of November 19 will remain historic for India. Today, on the auspicious day of Guru Purnima, the Modi government bowed down to farmers’ peaceful protest and repealed the three controversial agricultural laws.

With a feeling of sorrow in his voice, Prime Minister Narendra Modi accepted that he was not able to convince the farmers despite putting tremendous efforts.

As PM announced the good news, political leaders of Punjab, forgetting the political rivalries welcomed the decision and celebrated the end of farmers’ protest.

Where Punjab PCC head Navjot Singh Sidhu said that “repealing of black laws a step in the right direction," his arch-nemesis Captain Amarinder stated, "the day come as huge relief to farmers."

“Repealing of black laws a step in the right direction. Satyagrah of Kisan morcha gets historic success…. Your sacrifice has paid dividends…. Revival of farming in Punjab through a road map should be the top priority for the Pb govt ….accolades,” he wrote on Twitter.

"Great news! Thankful to PM @narendramodi ​ji for acceding to the demands of every punjabi & repealing the 3 black laws on the pious occasion of #GuruNanakJayanti. I am sure the central govt will continue to work in tandem for the development of Kisani! #NoFarmers_NoFood @AmitShah,” he said.

Capt Amarinder further stated that this is a ‘Huge huge day for Punjab."

"I’d been pursuing the matter with Centre for last 1+ year & had met PM Modi and Home Minister Amit Shah requesting them to heed the voice of our annadaatas. Really happy they’ve heard farmers & understood our concerns."

Hinting a possible alliance with BJP in Punjab, Capt added “This has not only come as a huge relief to farmers but has paved the way for Punjab’s progress. I look forward to working closely with @BJP4India led centre for the development of Kisans. I promise Punjab’s people I won’t rest till I wipe every tear from every single eye.”

Punjab education minister Pargat Singh on Twitter congratulated farmers of the whole country for the repeal of farm laws. “It is a historic victory for their tenacious struggle. Farmers and people of Punjab, Haryana and UP who led the struggle will always have their names inscribed in history,” he added.

Prime Minister Modi while addressing the nations stated that his government is doing its best to improve the financial well-being of the farmers and is committed to serving them.

"The goal of the three farm laws was to empower farmers, especially small farmers. In the coming Parliament session, we will take constitutional measures to repeal these farm laws.”