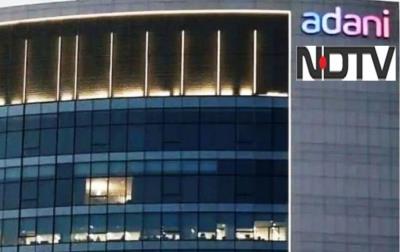 On August 23, Vishvapradhan Commercial, in a notice to RRPR Holding, intimated that it was exercising its right to convert warrants issued to it in 2009 into equity shares.

The conversion of warrants into equity would lead to Vishvapradhan Commercial gaining control of 99.5 per cent of RRPR Holding that holds 29.18 per cent stake in NDTV.

In a regulatory filing NDTV said RRPR Holding has informed Vishvapradhan Commercial that its 29.18 per cent equity stakes in NDTV were provisionally attached by the Income Tax Authorities in 2017 with notification in 2018 that the attachment shall remain in place until completion of reassessment proceedings.

RRPR Holding has also informed Visvapradhan Commercial that operation of these order(s) of attachment will require approvals and/or clarifications from the Income Tax Authorities on the former exercising its right to convert the loan warrants into equity shares.

According to NDTV, RRPR Holding has invited Visvapradhan Commercial to join its application to the Income Tax authorities.

"The Income Tax Department attachment order of 2017 (read with order of 2018) pertains inter alia to the loan agreement with VCPL (Visvapradhan Commercial) in 2009, and is premised on RRPRH (RRPR Holding) (allegedly) transferring its controlling interest in NDTV to VCPL for Rs 403.85 crore, culminating in an estimate of Rs 175 crore "tax on capital gains arising on sale of controlling interest in NDTV to VCPL" on RRPRH," NDTV said in its filing.

In its filing, NDTV said: "Further, RRPRH has intimated VCPL that as individuals, Radhika and Prannoy Roy may individually require independent approval, under section 281 of the Income Tax Act, from the Income Tax Authorities, to deal with any assets, including indirect shareholding in NDTV, arising from sub judice (impugned) orders."

Earlier, NDTV had said that RRPR Holding has written to Securities and Exchange Board of India (SEBI) to determine whether the regulator's order of November 27, 2020 restricts conversion of warrants issued to Vishvapradhan Commercial into equity.

Responding to that, Adani Enterprises said their contentions were baseless, legally untenable and devoid of merit.

According to Adani Enterprises, RRPR Holding was not a party to the SEBI Order dated November 27, 2020.

Consequently, the restraints as pointed out by RRPR Holding in paragraphs 111(b) and 112 of the SEBI order do not apply to it.

The warrant exercise notice has been issued by Vishvapradhan Commerical under a contract which is binding on RRPR Holding, Adani Enterprises had said.

The Adani Group is in the middle of a takeover for Indian broadcaster NDTV.