Prof Kartar Singh breathed his last at around 2:15 am at the Dayanand Medical College in Ludhiana. 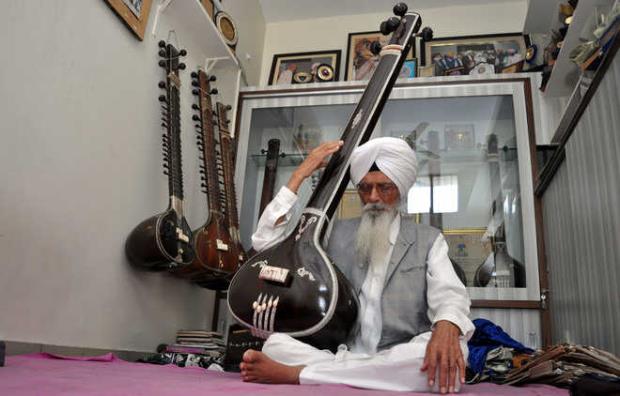 Gurmat Sangeet legend Padma Shri Professor Kartar Singh has passed away at the age of 94. He was admitted to Dayanand Medical College for a long time due to a brief illness and died on Sunday at 2:15 am. He was awarded the Padma Shri award in 2021 for his contribution to Gurmat Sangeet and the music world.
His last rites will be performed at Model Town Extension at 4 pm today.
Prof Kartar Singh was granted the Padma Shri for his tremendous contribution to the world of art, however, he was unable to attend the ceremony due to health difficulties. On behalf of the President of India, Deputy Commissioner Ludhiana Varinder Kumar Sharma presented the prestigious Padma Shri award to Gurmat Sangeet maestro Prof Kartar Singh, last month.
Also Read: Does Majithia's presence at Golden Temple indicate failure of state intelligence?
Who was Prof Kartar Singh?
He was born in 1928 in Ghummanke village of Lahore and settled in India at the time of the partition of India and Pakistan. He learned music from Mr Gurcharan Singh and Mr Sunder Singh. He also learned Tabla at Gurdwara Sahib. Later, he gathered knowledge in classical music from Mr Balwant Rai Jaswal and Mr Jaswant Bhanwara.
Professor Kartar Singh was a master of String Instruments. Because of his knowledge in music, he got an opportunity to work in the Department of Music at Malwa Central College of Education, Ludhiana and at Guru Nanak Girls College, Ludhiana for a long period. Apart from this, he has also been working as the director of Gurmat Sangeet Academy in Sri Anandpur Sahib.
He had written five books, which were published by SGPC. He was also a member of Sahitya Akademi, Ludhiana.