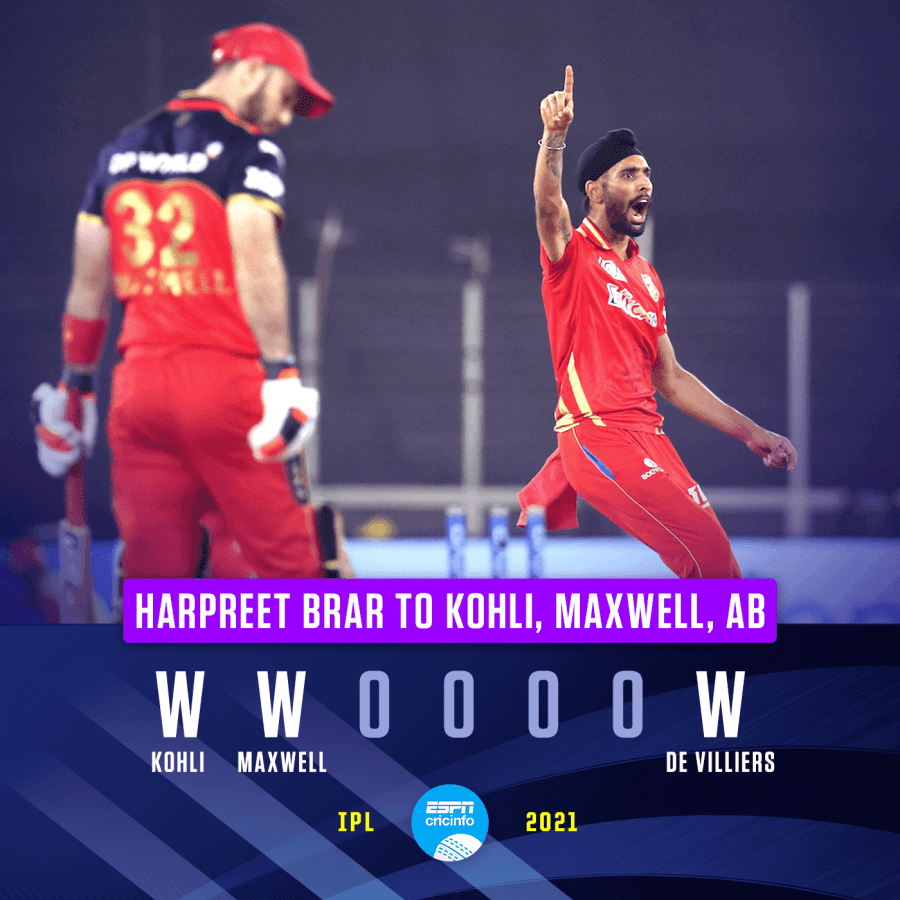 Harpreet Brar, a 25-year-old bowling all-rounder for the Punjab Kings, was a little-known player who didn't play in an IPL game until Friday night. When he finally got his chance, he dismissed Virat Kohli and Glenn Maxwell off consecutive deliveries before also dismissing AB de Villiers to finish with a match-winning 3 for 19 in only his fourth IPL game. Here's the lowdown on the Kings' newest hero.

Who is Harpreet Brar?
Brar is a left-arm spinner and a hard-hitting lower-order batter from Moga, Punjab, which also happens to be Harmanpreet Kaur's hometown. Brar was selected by Kings XI Punjab in the 2019 IPL auction for his base price of INR 20 lakh at the age of 23 after playing age-group cricket and several club competitions in Punjab.

Harpreet Moga's father works for the Punjab Police Department as a driver. The achievement of a son from a common family is remarkable. Above all, he has demonstrated his bravery in support of farmers, demonstrating that "every soil has its own wealth", "every soil does not get beaten up.”


IPL Magical night
Harpreet Brar clean bowled Virat Kohli and Glenn Maxwell over the top in the match.  Harpreet Brar reminded Harjeet Brar (Bajakhana) by slapping on the thigh . Like a point-scoring raider, he lifted his finger to Utah. Aside from taking AB de villiers' third wicket, he also took a catch. The top three batsman wickets are also Harpreet's first three IPL wickets. Harpreet had previously played an unbeaten inning of 25 runs in 17 deliveries, including a six off the final shot.

He said, ”My first IPL wicket is Virat paaji's wicket so I was very happy when I got that.”

Brar said after receiving his Player-of-the-Match award at the presentation, ”Once you get one wicket, the mentality changes a bit, you get confidence that you're landing the ball nicely, so I got the flow and more wickets.

Harpreet on Turban
When Harpreet Brar became the only cricketer to support farmers on Twitter, he won many hearts from not only Punjab but also from abroad. When asked if he was like Akshay Kumar from Singh Is Bling, he said, "Paise k liye nhi Turban nhi pehnte hum.”(we don't wear turban for money).