More than 70 crore Indians have been administered the first dose of the Covid vaccine while 29 crores have received full doses, shows the government’s Cowin website. 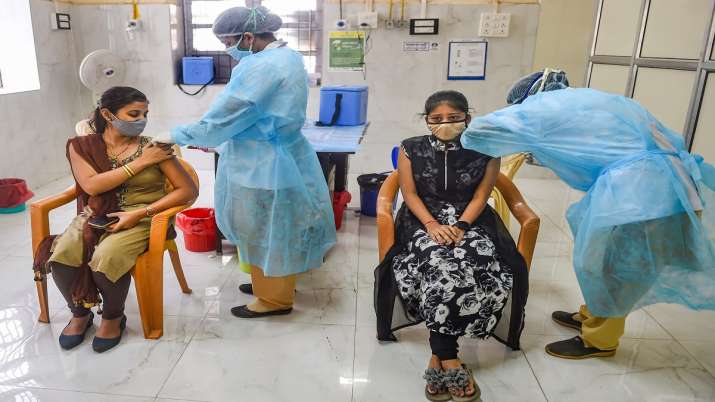 India scripted history as it outdid the 100 crore milestone today. According to the government’s Cowin website, more than 70 crore Indians have been administered the first dose of the Covid vaccine while 29 crore people have got the full shots of the vaccine.

Prime Minister Narendra Modi took to his Twitter handle to congratulate India for achieving the one billion COVID-19 vaccinations milestone mark. He congratulated the country's health care workers for helping the country achieve this feat.

"We are witnessing the triumph of Indian science, enterprise and the collective spirit of 130 crore Indians," he said.

The prime minister earlier on Thursday visited the Ram Manohar Lohia Hospital in Delhi after the country achieved the milestone and interacted with hospital officials. He was accompanied by Health Minister Mansukh Mandaviya, who said, "Congratulations India! This is the result of the leadership of our visionary Prime Minister Narendra Modi,” in a tweet as he officially announced the milestone at 9:48 AM.

Also Read: ‘I place high value on criticism but unfortunately...’: PM Modi says he keeps distance from world of power

The top five states that have administered the highest numbers of Covid shots are Uttar Pradesh followed by Maharashtra, West Bengal, Gujarat and Madhya Pradesh.
India is the second country after China to achieve the one-billion vaccine dose mark. China has fully inoculated some 1.05 billion, that is 75% of its citizens, as of late September.

Meanwhile,  Dr VK Paul, Member-Health at NITI Aayog congratulated the healthcare workers and people saying it's remarkable to reach the 100 crore billion dose mark for any country. It's been a big achievement for teh nation in just over nine months since the mass vaccination program began on January 16.

However, he also signalled that 25% of adults eligible for free vaccination are still unvaccinated. “Efforts must go forward to vaccinate those who haven't taken the first dose," he added.

“Just over 30% of Indians vaccinated with both doses, about 10 crore individuals are now overdue, they should have received the second dose, but they have not. It's now unfinished work that we must accomplish, and send reminders to those individuals to take their second dose," said Dr Paul.

Union Health Minister Mansukh Mandaviya will be launching a song and an audio-visual film at the Red Fort on the occasion. The song is sung by singer Kailash Kher. News agency PTI reported that on the day the largest national flag will be raised weighing around 1,400 kg, at the Red Fort.

The government plans to vaccinate all of India's 944 million adults by the end of this year.

Dr Poonam Khetrapal Singh, the regional director of WHO South-East Asia called it an “extraordinary feat” and said it was impossible to achieve in a short span without “strong political leadership, inter-sectoral convergence, dedicated efforts of the entire health & frontline workforce."

To mark this achievement, the government has plans of announcements over loudspeakers on trains, planes and ships. It also had plans of putting up posters and banners recognising the efforts of healthcare workers in villages that have achieved 100 percent vaccination.

With an increase in the domestic production of the AstraZeneca vaccine, states are sitting on an excess stockpile of 100 million. Daily vaccinations have averaged at 5 million shots this month.