There are many expensive gifts that Raj Kundra has pampered Shilpa Shetty with! 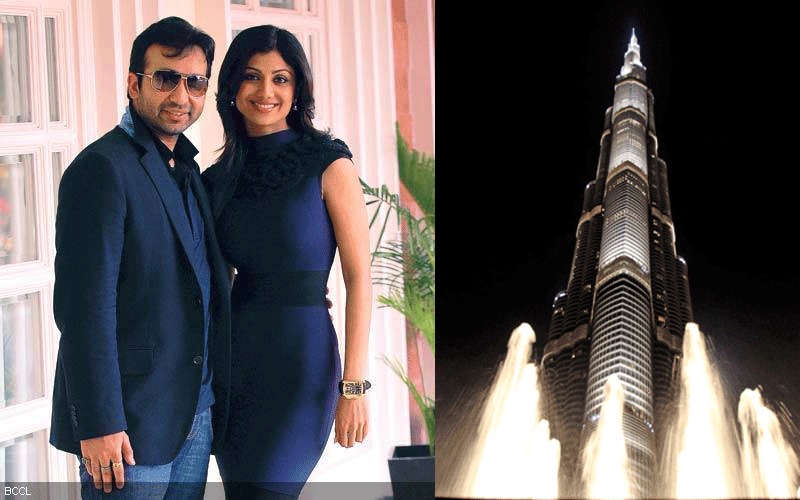 An actor, dancer, fitness enthusiast, businesswoman and reality show judge Shilpa Shetty Kundra is undoubtedly one of the most sought after and popular actresses of Indian cinema. She enjoys a huge fan following and has delivered many hit films. While we are no strangers to the extravagant gestures of love, London based businessman Raj Kundra has displayed for his wife, Shilpa Shetty time and again, we still can't help but get all wide-eyed at the stats! Be it the luxurious real-estate conquests of this super-affluent power couple, or their love for opulent vehicles and jewellery, Shilpa Shetty sure is one lucky wife..And while Raj’s case is under investigation let’s apprise you about the many expensive gifts the millionaire businessman given to his wife.

When he gifted an apartment on the 19th floor of the tallest tower in the world—The Burj Khalifa, Dubai, Shilpa received the most expensive wedding anniversary gift ever in Bollywood's history—to own an apartment in a building where normal people find it bank-breaking to even spend a day. However, Shilpa recently revealed that she has sold off her property there, and prefers to stay at a plush hotel where everything is serviced, instead of travelling with a full entourage.

The gorgeous diva Shilpa Shetty wears a diamond that shines almost as bright as her. Her husband-business tycoon Raj Kundra presented the actress with a 20-carat ring, which reportedly costs Rs 3 crores.

Speaking of automobiles, along with many other cars like the BMW Z4that Raj has gifted Shilpa, the blue Lamborghini he gifted her broke headlines. Even before the luxury car got a launch in India, the Kundras had it in their garage.

Coming back to exotic properties abroad, Raj Kundra also spoiled his wife with his magnificent seven-bedroom property called 'Raj Mahal' in Weybridge, Surrey. Located on the exclusive St. George's Hill Estate, it is an enclave for the rich and famous. Well, duh. This was a property bought by Raj Kundra while he was still married to his ex-wife, and Shilpa Shetty convinced him not to sell it after his divorce, as she saw it as her 'family home'. Wise decision, lady.

Not only does Raj have a knack for throwing the best birthday parties for his wife, he always supplements it with an OTB (read: ridiculously expensive) gift! Besides the 'Raj Mahal' mentioned above, he also decided to buy Shilpa a flat worth more than Rs 7 crore in Central London. Soon after Shilpa got the keys, she began shopping for home accessories and designing the apartment. London is a hot-fave destination that the actor visits, probably why her husband decided to gift her an apartment there. Men, take note.

Raj Kundra wants to create a record of buying an apartment in all the tallest buildings in the world! The businessman didn't just book a flat in Burj Khalifa Dubai, but also gifted Shilpa a luxurious flat in 2012, spread over 3000 sq. ft. in a building called 'Supernova' in Noida, which is the tallest building in India, at 80 storeys.