While Priyanka wore a Sabyasachi modern Indian retro-inspired attire, Youtuber Lilly Singh was donned in a sherwani-style jacket with pants. 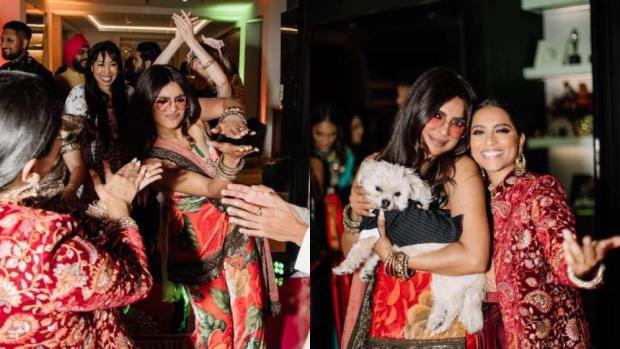 Actress Priyanka Chopra has surely taken America by storm and never fails to get her desi love wherever she goes. The actress recently attended Youtuber comedian Lilly Singh known popularly as ‘Superwoman’ Diwali party held in Los Angeles and we were quite impressed over Quantico actor’s outfit for the night as she concluded the festivity.

Styled by celebrity stylist Ami Patel, Priyanka routed a pure retro-chic in an orange and green Sabyasachi ensemble. She donned a short top paired with palazzos in floral patterns. To complete her look, the actress went for a stole, tainted circular shaped eye gear, oxidized silver-green jewellery, open hair and a sling potli bag.
Other celebrities who graced Lilly Singh’s Diwali bash were  Mindy Kaling, Kal Penn, Tesher, and Poorna Jagannathan and Richa Moorjani. Everybody was decked up in a traditional outfit representing Indian culture.

Taking to her Instagram on Sunday, Priyanka shared a series of pictures from the celebration dressed in a chic velvet suit set. Thanking Lilly Singh for the star-studded party, Chopra called the Diwali celebrations epic. ”What makes Lilly SINGH the perfect host and dost? She’s a fellow PUNJABI. What an epic end to this year’s Diwali celebrations! Thank you @lilly for such an amazing evening,” Priyanka captioned her post.

Priyanka’s entire look reminds us of yesteryears actress Zeenat Aman’s look from Dum Maro Dum. Taking more about her outfit, Priyanka accessories were also from Sabyasachi and the striking necklace is called ‘The Nani Bucket’. With bright colours, bold jewels and stacks of bangles on each wrist, Chopra brought back every bit from the 70s-80s Bollywood glam period.
Also Read: Top 10 Most Popular Punjabi Actors 2021

Meanwhile, Priyanka Chopra’s post has gained 4 lakh likes and several compliments for her look, one being from husband Nick Jonas who dropped a heart-eye emoji. 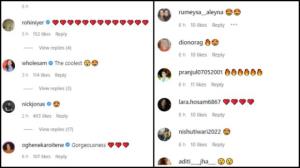 Priyanka Chopra has always been open about her love for India, its culture, festivals and traditions and speaks highly of it wherever she goes. Nick and Priyanka also celebrated Diwali at their own house which was again a star-studded affair which was attended by Chrissy Teigen and John Legend, Mindy Kaling, Lilly Singh and among others.

Coming to her professional life, Priyanka has a bunch of projects in her kitty, including American romantic drama titled 'Text for You', Patrick Moran and the Russo brothers' 'Citadel', the film adaptation of 'Cowboy Ninja Viking' where the actress will star opposite Chris Pratt. Apart from these Hollywood flicks, she will also be seen in Farhan Akhtar’s ‘Jee Le Zaraa’ alongside Katrina Kaif and Alia Bhatt.

See more pics and videos from the Diwali celebrations.