"We received tremendous support from friends, from well-wishers. I thank them all," said Ms Kalita after being released from jail. 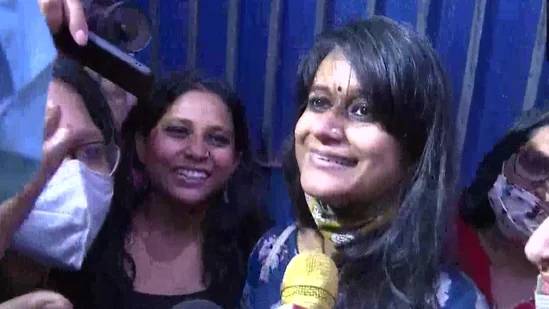 Natasha Narwal, Devangana Kalita and Asif Iqbal Tanha - student-activists accused in the northeast Delhi riots walked out of Delhi’s Tihar jail last evening holding their heads high and with a smile. They were released hours after the Delhi High Court ordered their immediate release.

The three activists were arrested for their alleged involvement in the 2020 Delhi riots and conspiring and encouraging hate and were termed as terrorist elements posing threats to national security.

Ms Kalita while speaking to media outside the jail gates said, "It shows the desperation of the government... We are women who are not scared of them. We survived because we received tremendous support from friends, from well-wishers. I thank them all.”

As the case is still in court, Natasha Narwal said that she will not comment on anything related to the case, however, thanked Delhi HC for upholding the constitution and the very factor on which a democratic country functions.

Ms Narwal said she doesn't want to comment on the case as it's still in court. “Any such protest that we have done is not terrorism. It was a democratic protest, led by women," Ms Narwal added.

"They won't be able to threaten us with jail. If they threaten to incarcerate us, that will only strengthen our resolve to carry on our fight," Ms Narwal said.

Mahavir Narwal, Natasha Narwal’s father who himself was a communist activist, died due to Covid in May while she was in jail. Her brother who came to receive her said that they miss their father and he would have come to greet her on this occasion had he been alive.

Natasha further said that she doesn’t know how she will deal with her father’s death. “This should be a reminder for us of how the system of incarceration separates us from our loved ones. My case was highlighted. But many are not allowed even one phone call. We should ask ourselves, how did we reach such a point where the line between terrorism and dissent has been blurred? People are jailed with frivolous charges. When people protest, it is not terrorism," Ms Narwal said while speaking to news channel NDTV.

The order to release the three student activists came two days after the Delhi HC had granted bail to Natasha Narwal, Ms Kalita and Asif Iqbal Tanha. They were arrested last year under the stringent Unlawful Activities (Prevention) Act (UAPA).

Meanwhile, the Supreme Court is scheduled to hear a petition on Friday filed by the Delhi police against the Delhi High Court decision to grant bail to the three student activists.

Granting bail to the three activists on Tuesday, the court ordered them to submit bonds of ₹ 50,000 each and two sureties of a similar amount. Another condition for their release included the surrender of their passports.

"In an anxiety to suppress dissent, the state has blurred the line between the right to protest and terrorist activity" and if such a mindset gains traction, it would be a "sad day for democracy," the HC observed while granting them bail on June 15.