On Friday, Indian photojournalist Danish Siddiqui was killed in Afghanistan after the clashes broke out in the spin Boldak district of Kandahar city in Afghanistan. 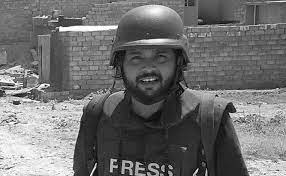 On Friday, India has lost its one of the finest photojournalist. Indian photojournalist, awarded by Pulitzer award, died during the clashes in the Spin Boldak district of Kandahar City in Afghanistan. He was there on a reporting assignment embedded with the Afghan Special Forces.

On July 13, Siddiqui tweeted that he is “lucky to be safe” and recalled how the vehicle in which he was traveling came under attack by the Taliban. He wrote, “The Humvee in which I was traveling with other special forces was also targeted by at least 3 RPG rounds and other weapons. I was lucky to be safe and capture the visual of one of the rockets hitting the armor plate overhead.” He shared a thread of tweets and explained the full story.

Farid Mamundzay, Afghanistan’s Ambassador to India, condoled Danish’s demise and tweeted, “Deeply disturbed by the sad news of the killing of a friend, Danish Siddiqui in Kandahar last night. The Indian Journalist & winner of the Pulitzer Prize was embedded with Afghan security forces. I met him 2 weeks ago before his departure to Kabul. Condolences to his family & Reuters.”

Many journalists bid farewell to Danish Siddiqui on Twitter. Here are some of the tweets:

So tragic to hear that my Indian friend, Pulitzer Prize winner journalist Danish Seddiqi got killed in Kandahar last night. He was embedded with Afghan forces. We met last week and he was telling me about his kids, family and his work from covering Rohingya to pandemic in India.

Terrible Terrible news. Our dearest Danish Siddiqui, Reuters Chief photojournalist, was killed in clashes in Spin Boldak district in Kandahar, Afghanistan. He was embedded with Afghan forces which came under attack by Taliban. Remember reporting with him on many assignments. RIP pic.twitter.com/htFvIT8MiG

News of Danish Siddiqui, Pulitzer winning Reuters photo journalist from Afghanistan, is bone chilling. I desperately pray that this news is untrue.

Danish Siddiqui was India’s Eye! He captured some of the most seminal images of the recent years as the Reuters Chief Photographer. We lost him while he was covering the war in Afghanistan. Two days back he had a close shave. Rest in Power, Danish! https://t.co/uzzr8cxm10

Danish Siddiqui came to our newsroom as a bright young reporter in Sept 2008. His passion was exceptional. He won the respect of his peers and seniors. Danish was always destined for journalistic greatness. Heartbroken to know about his untimely death. https://t.co/mg0yzxdcs7

Danish Siddiqui - who showed the world the human tragedy behind India's Covid crisis - has been killed while on an embed with Afghan forces in Spin Boldak.

I ranked him as one of the best photo journalists in South Asia, and the world is definitely worse off with him gone. https://t.co/zkju00cxgb

Also Read: AIIMS chief lists out how 3rd wave of Covid might be bigger than the second one

Danish Siddiqui had started his career as a TV news correspondent and later he switched to photojournalism. He worked with news agency Reuters and worked as a correspondent with the India Today Group from September 2008 to January 2010.