Legislation to safeguard properties of NRIs to be brought soon in state assembly, says Punjab CM 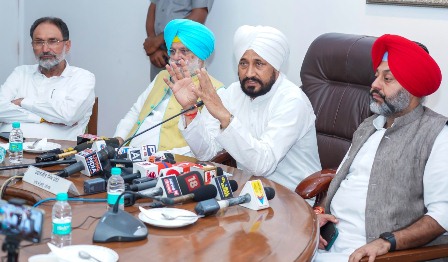 Punjab Chief Minister Charanjit Singh Channi on Monday announced a scheme ‘Mera Ghar Mere Naam’ to bestow proprietary rights on the people living in the houses within the ‘Lal Lakir’ of villages and the cities. The entire exercise in this regard would be completed within two months.

Addressing the media persons here at CMO, the Chief Minister said that earlier this scheme was launched only for the residents of villages, which is now being extended to the eligible residents of the cities within the ‘Lal Lakir’. He said the Revenue department has been mandated to undertake drone survey of such residential properties both in rural and urban areas for digital mapping. Subsequently, all the eligible residents after proper identification/verification would be given the property cards (sanads) to confer proprietary rights upon them.

Prior to this, the beneficiaries would be given a time of 15 days to file their objections in this regard and in case no reply is received from them and the property card would be issued which would serve purpose of registry against which they can get loans from the banks or even sell their properties thus enhancing its monetary value. Further, the Chief Minister also mentioned that the people residing in the houses in old localities (mohallas) since long generation after generation would also be covered under the scheme. The Chief Minister also pointed out that even the NRIs, who had occupied such residential properties in villages/cities would also be duly informed to raise objections so as to give proprietary rights to them.

To safeguard the properties of NRIs settled across the globe, the Chief Minister said his government would soon bring legislation in this behalf in the Punjab Vidhan Sabha. He also announced that the Girdawari of the agricultural land owned by them would be done in their names to prevent illegal/fraudulent sale of properties by certain unscrupulous elements.

On the issue of waiving off the arrears of electricity bills upto 2 KW load, the Chief Minister categorically said that anyone regardless of caste, creed and religion would get the benefit of waiver. He said that out of 72 lakh consumers nearly 52 lakh across the state would be benefitted. He also clarified that only those arrears mentioned in the last bill received by the consumer would be waived off.

Responding to the query regarding acute coal shortage in the country, the Chief Minister said he had already taken up this issue with the Ministry of Coal to ensure requisite supply so as to avert the impending power crisis. He assured that his government won’t let the state to plunge into darkness despite scarcity of coal adding he said no intentional power cuts would be imposed.

Prominent amongst others who were present on the occasion included, Cabinet Ministers Rana Gurjit Singh and Gurkirat Singh Kotli besides MLA Madan Lal Jalalpur.