Chief Minister said that in order to quell the disturbances in the Pathan areas, four columns of the then British Indian Army were sent by General Lockhart. 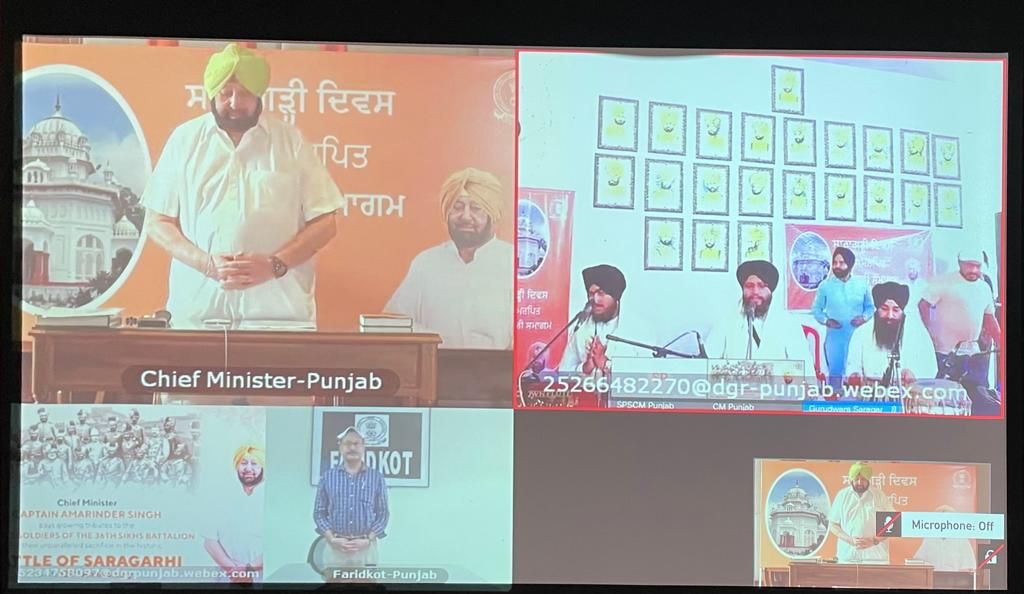 Punjab Chief Minister Captain Amarinder Singh on Sunday paid glowing tributes to the soldiers of the historic Saragarhi battle on its 124th anniversary.

After virtually paying obeisance in Gurudwara Saragarhi during the state-level martyrdom day function, the Chief Minister in his address recalled the valour of the 22 soldiers of the 36th Sikh stationed near Samana ridge (now in NWFP Pakistan), who laid down their lives after a fierce battle following an attack by nearly 10,000 Afghans on September 12, 1897.

Giving the background, the Chief Minister said that in order to quell the disturbances in the Pathan areas, four columns of the then British Indian Army were sent by General Lockhart. Of these, 36th Sikh (Now 4 Sikh) comprising 21 Sikh soldiers and a cook, was assigned the task of defending Saragarhi which was an Observation post for ensuring communication between Fort Lockhart and Fort Gulistan. "On 12th September 1897 in the Morning, Pathans hailing from Afridi and Orakzai tribes attacked the Saragarhi in huge numbers. The Pathan demands for surrender were rebuffed strongly by Havaldar Ishar Singh. Soon the attack ensued prompting Ishar Singh to send a signal to his superior Colonel Houghton who asked them to hold positions," said Captain Amarinder Singh adding the battle continued till mid- Afternoon and every Sikh soldier fired 400-500 rounds of ammunition. The Chief Minister further said that all the efforts to send help to the besieged soldiers were unsuccessful owing to a large number of tribal Pathans. At last, Sepoy Gurmukh Singh sent the last signal to Colonel Houghton and picked up the gun to fight. None of the soldiers surrendered and all were martyred.

The Chief Minister further said that it is also a matter of pride the statue of Havaldar Ishar Singh is being unveiled today in Wolverhampton (U.K.).

Paying glowing tributes to the martyrs on the occasion, Sports and Youth Affairs Minister Rana Gurmit Singh Sodhi said that the martyrdom of these Sikh soldiers was recognized all over the world with even Queen Victoria acknowledging the same and further the highest gallantry award at that time Indian Order of Merit (IOM), equivalent to Param Vir Chakra, was awarded to each martyr. The Minister while releasing a brochure on Saragarhi, said that the sacrifices of these soldiers would be ever remembered by one and all.

Proposing the vote of thanks, MLA Ferozepur (Urban) Parminder Singh Pinki demanded that a langar hall should be constructed on the 2.5 acres of forest land to which the Chief Minister asked the Deputy Commissioner to send a detailed proposal.The MLA also appealed to the Prime Minister to extend Rs. 11 crore assistance in the proper upkeep of the Saragarhi Gurudwara.

The occasion also saw the kin of the martyred soldiers and the Veer Naris being honored.