Two volunteers - Sabrina Grover, a candidate of the Liberal Party from Calgary Central, during an ongoing election campaign were attacked. 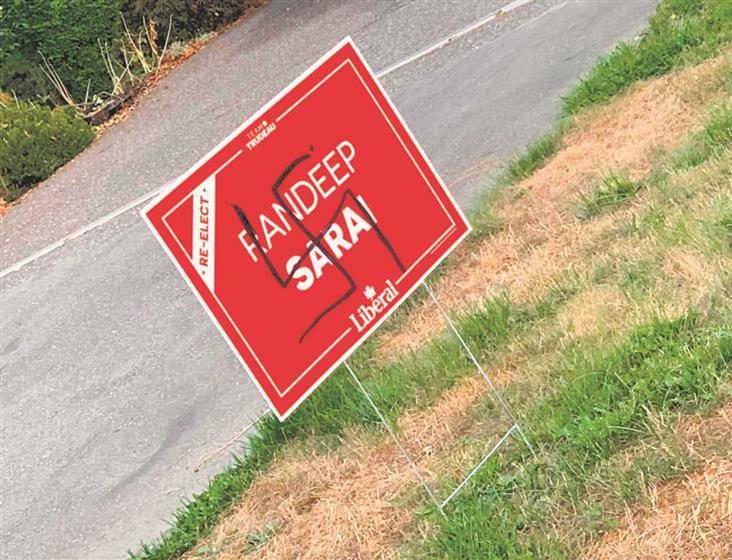 Punjab origin candidates contesting the federal election in Canada have been victims of racial attacks.

Randeep Singh Sarai was marred by a spray painting with a swastika symbol, adopted by the Nazis. Sarai is a Liberal candidate who is up for re-election in the Surrey Centre.

In a tweet, Mr Sarai said: “I am disappointed to see that one of my signs was defaced in Surrey Centre. This behaviour is intolerable. I deplore this anti-Semitic behaviour, I know my neighbours will join me in calling it out. Let’s move forward with kindness and constructive discussion.”

Meanwhile, another similar incident was reported where two volunteers - Sabrina Grover, a candidate of the Liberal Party from Calgary Central, during an ongoing election campaign were attacked.

“The volunteers were campaigning in an apartment building when they were approached by a man, slapped and spat on. Both my volunteers are unharmed but shaken. This is not right, hateful interaction is unacceptable. I was born and raised in Calgary. This is my home," Sabrina Grover said.

While campaigning in Windsor, Ontario - NDP leader Jagmeet Singh had withstood a racist comment. In an event in a park, a man was heard screaming “go back home”, that came from a passing vehicle. Jagmeet, who was born in Scarborough, Ontario, and brought up in Windsor, remained unshakeable and continued with his speech. Later speaking on such incidents, Jagmeet said whenever such hated slurs are passed he focuses on himself, however, he is very much in trouble about the increasing level of hate in Canada.

The Punjabi candidates running for the elections have been encountering racial abuse and the migrant community is also angry over the destruction of the Komagata Maru Memorial which is located at the Coal Harbour in Vancouver.

The walls were splattered with white paint with the victim names and handprints; prints were visible while ‘893 YK’ was written on them.

Rachna Singh, an MLA from Surrey Timber Greens and parliamentary secretary for anti-racism initiatives, said that during the campaign, they encountered candidates hoarding being damaged and hate slogans were written on them. Such incidents and attitudes are unacceptable and 'cowardly.'