The son of Shilpa Shetty Ravi entered the prison, carrying a new set of clothes for Raj Kundra. 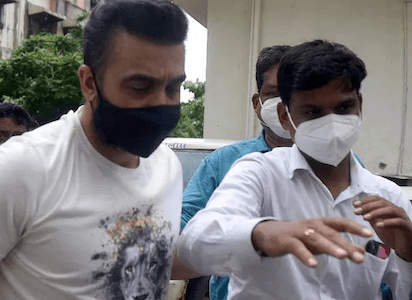 Raj Kundra came home on September 20 after being granted bail in an accused pornography case. The businessman was arrested by Mumbai Police on July 19, and after two months in custody, Raj was seen exiting in a car. The 45-year-old businessman was photographed wearing a teeka and appeared to have lost weight. Raj was pushed as he walked out the door.

The son of Shilpa Shetty Ravi entered the prison, carrying a new set of clothes for Raj Kundra. He changed his clothes, put on a teeka, and then walked out of prison. When Raj walked out, he was overcome with emotion and in tears. He avoided the media frenzy and cameras by getting into a car that was waiting for him, which then drove him to his Mercedes, which was waiting for him at a distance to take him home," a source claimed.
Also Read: Too busy, so unaware of Raj Kundra's porn business: Shilpa Shetty
Raj Kundra was granted bail on September 20 by a Mumbai court, with a surety of Rs 50,000. He was accused of being a "key conspirator" in a pornographic case and was interrogated about his link to the Hotshots app, which was used to broadcast adult content.
Also Read: Shilpa Shetty visits Mata Vaishno Devi Temple amid ongoing porn case of her husband Raj Kundra
In the case of pornographic content, the Mumbai Police had already filed a roughly 1500-page supplementary chargesheet. Kundra allegedly set up Hotshots, an online platform, with the purpose of disseminating pornographic content, according to the chargesheet. Raj, on the other hand, said in his bail application that he was being used as a scapegoat in the case and that there was no proof that he was "actively" involved in the creation of suspected pornographic content.

“Investigation was over and the chargesheet was issued, and thus additional custody was not required,” Kundra's lawyer, Prashant Patil, told in a statement. The court decided that since the charge sheet had been submitted and it had already been determined that the films in issue were shot with the agreement of adult women, the accused should not be held in custody.”
Shilpa Shetty made a statement following Raj Kundra's arrest, expressing trust in the Mumbai Police and seeking privacy.