A collective impressive performance by Bhanuka Rajapaksa, Wanindu Hasaranga and Pramod Madushan led Sri Lanka to Asia Cup 2022 title with a clinical 23-win over Pakistan in the final at the Dubai International Cricket Stadium, here on Sunday. Author : Rakesh Behal 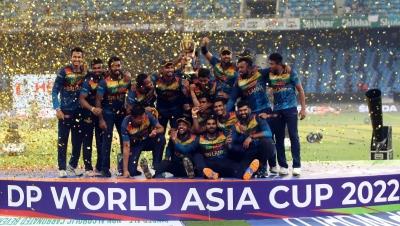 A collective impressive performance by Bhanuka Rajapaksa, Wanindu Hasaranga and Pramod Madushan led Sri Lanka to Asia Cup 2022 title with a clinical 23-win over Pakistan in the final at the Dubai International Cricket Stadium, here on Sunday.

An impressive fighting fifty by Bhanuka Rajapaksa (71 not out off 45) and an attacking knock by Wanindu Hasaranga (36 off 21) propelled Sri Lanka to a fighting total of 170/6 in 20 overs. Apart from Rajapaksa and Hasaranga, Dhananjaya de Silva (28 off 21) and Chamika Karunaratne (14 not out off 14) also played vital knocks for Sri Lanka, during their stay at the crease.

Chasing a challenging total, Pakistan were helped by some wayward bowling of Dilshan Madushanka, who gave 12 runs in the first over rife with wides and uncontrolled swing. However, Pakistan couldn't take advantage of that momentum as Sri Lanka found a hero in Pramod Madushan, who dismissed Babar Azam and Fakhar Zaman off consecutive deliveries and helped his team get on top.

Babar, who now does not have a fifty in six T20I games on the trot, first flicked one straight to short fine before Zaman chopped the ball onto his wicket. At 22/2 after 3.3 overs, Pakistan were in a spot of bother, but the in-form Mohammad Rizwan and Iftikhar Ahmed batted cautiously to lead the recovery for their team.

Rizwan was picking crucial boundaries at regular intervals to keep the scoreboard ticking. On the other hand, Iftikhar, who got a reprieve in between, was also giving the much-needed support as Pakistan were 68/2 after 10 overs.

Though Pakistan were keeping wickets in hand, the required rate was rising with every passing over. Iftikhar hit Hasaranga for a much-needed six and boundary to give impetus to the run-chase. He tried to do the same against Madushan but the ball only got the height not the distance, with the fielder at deep backward square got under it and held it safely, leaving Pakistan at 93-3 after 13.2 overs.

From there on, Pakistan needed to put the foot down on the accelerator but Sri Lanka bowled and fielded with excellence. They dried up the runs, increasing the pressure while upping the required run rate.

All-rounder Mohammad Nawaz couldn't deliver the big hits, falling for 6 against Karunaratne. It was now up to Rizwan, who was the set batter to guide Pakistan home, as they needed 69 off 28 deliveries.

After bringing up his half-century, Rizwan was outfoxed by Hasaranga as Sri Lanka etched closer to victory with the required run rate almost touching the 16-run mark. Hasaranga then dismissed Asif Ali for a first-ball duck and followed it up with Khushdil Shah for 2.

Eventually, Karunaratne got the final scalp of Haris Rauf (13) as Pakistan were bowled out for 147 in 20 overs, losing by 23 runs. Pramod Madushan (4/34) and Wanindu Hasaranga (3/27) were the highest-wicket takers for Sri Lanka while Chamika Karunaratne (2/33) and Maheesh Theekshana (1/25) also chipped in with a crucial wicket.

Earlier, put into bat first, Sri Lanka were off to a terrible start, losing three wickets inside the power play against the quality pace bowling. In the very first over, pacer Naseem Shah clean bowled Mendis, who was late to bring his bat down on a quality length ball. Pathum Nissanka and Dhananjaya de Silva then hit a few boundaries to show some fight back.

However, Pakistan skipper Babar Azam brought Haris Rauf into the attack and he put Sri Lanka back in trouble by taking the wickets of Nissanka and Danushka Gunathilaka.

On a quick delivery at 146 kph, Nissanka played a lofted shot but the ball went only to mid-off, where Babar Azam took a good catch running back. The pacer then dismantled the stumps of Gunathilaka, to leave Sri Lanka in deep trouble at 36/3 after 5.1 overs.

Among all Sri Lankan batters, Dhananjaya de Silva looked most comfortable and it seemed he would bail his team out of trouble. But, Iftikhar Ahmed got rid of De Silva with a brilliant reflex catch off his own bowling in the ninth over.

And in the next over, Shadab Khan breached the defence of Sri Lanka spinner Dasun Shanaka, who went for a wild slog but couldn't connect. With 58/5 in 8.5 overs, Sri Lanka were in danger of getting bowled but Rajapaksa and Hasaranga showed fighting spirit and did counter-attack.

Both Rajapaksa and Hasaranga looked in control against spinners and hit three boundaries off Shadab Khan. Hasaranga then slammed one boundary and a huge six over backward point to give impetus to the Sri Lankan innings.

From who else but Hasaranga -- 36 off 21. He was aggressive against Shadab, Hasnain and now Rauf again, hitting the pacer for two fours before he edged one to the keeper. What this wicket has done though is brought the match alive. Up until the ninth over, it was all Pakistan.

Hasaranga continued his aggressive approach and welcomed Haris Rauf with two boundaries before the pacer dismissed the batter to break a crucial 58-run stand for the sixth wicket, which brought the match alive. After the wicket of Hasaranga, Rajapaksa had the responsibility of batting till the last over and he did that with perfection. He hit boundaries and sixes to complete his half-century in 35 balls.

The left-hander also got able support from Chamika Karunaratne, which was required for a strong finish for Sri Lanka. Both Rajapaksa and Karunaratne remained not out, added 54 runs off only 31 balls and took Sri Lanka to 170/6 in 20 overs.