Ratnesh Bhutani: From producing films to evading arrests, how the story of America's one of the most wanted, came to an end 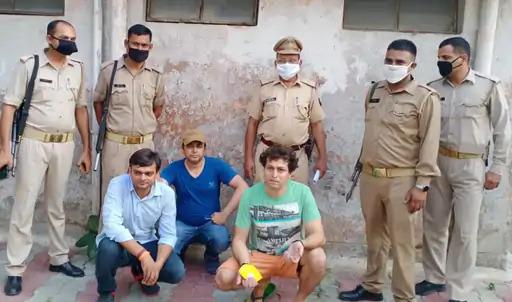 The Meerut unit of Uttar Pradesh STF finally nabbed Ratnesh Bhutani from Agra on September 17th. Born in Ghaziabad, the story of Bhutani, 45 is no less than the plot of an Indian drama. Listed among the top most-wanted in multiple cases including Interpol and CBI, Bhutani has a long history of criminal outings.

The Ghaziabad-born Bhutani reached America and received American citizenship by marrying a native there and fled years later after a case of sexual assault surfaced against him.

But who is Bhutani and how he rose to the pinnacle of the crime world, a look at his life by far:

As per the information provided by the STF team of the Meerut unit Bhutani belongs to Modinagar of the Ghaziabad district in Uttar Pradesh. He moved to California in the year 1996-97 where his uncle lived.

Years later he settled there after marrying a native there and received his American citizenship. In the year 2006 when he was booked in a case there, he fled to Mumbai via London.

With the assistance of his brother Rishi Bhutani, he started a film company named Keshav in 2007. He hid his identity in Mumbai, meanwhile, the trail to nab Ratnesh was on in America.

Meanwhile, he got married to Anshika in UP, the Interpol issued a red-corner notice against him. Intelligence and Investigative agencies didn’t get any clue about him and he kept maintaining his hotel business.

During the course of the investigation STF also found that his wife was a relative of a dreaded gangster Sushil Moonch. Bhutani alias Goldy was arrested by the Kankarkheda Police of Meerut in 2020 where he was charged in a case associated with his hotel.

Bhutani was accused of forceful acquisition of the land where his hotel stands in the name of his relative. A local BJP leader also registered a complaint on this, however, he was found dead in a suspicious state days after.

In America where Bhutani was wanted in the case of sexual assault served an input to CBI over his arrest. Agencies in India kept the trail on for him for months but he remained successful in evading arrest all the time.

The plot for his arrest was finally laid down after American agencies wrote a letter to the Indian government marking Ratnesh as the most wanted. Later the matter came to the notice of the DG of UP Police who ordered the constitution of an STF to nab Bhutani.

Soon after the investigation was launched into the case STF found Bhutani was the owner of a Meerut-based hotel Amantash in Kankarkheda and was staying near the regional office of Canara Bank in Agra.

The secret input about Bhutani to STF about staying in multiple cities of western UP helped in arresting the gangster on September 17th, It was after his arrest only the STF figured out about him being most wanted by the American police.

Being a citizen of the US will he be deported back to America or not the case around this is not known thus far.