Row erupts as PM Modi was stopped 50 km away from Pak border, CM Channi says “I express regret, We respect our PM”

On Wednesday, PM Modi was stopped at the road. Reportedly, he was set to lay the foundation stone for various multi-crore projects in Punjab and then address a rally at Ferozepur. 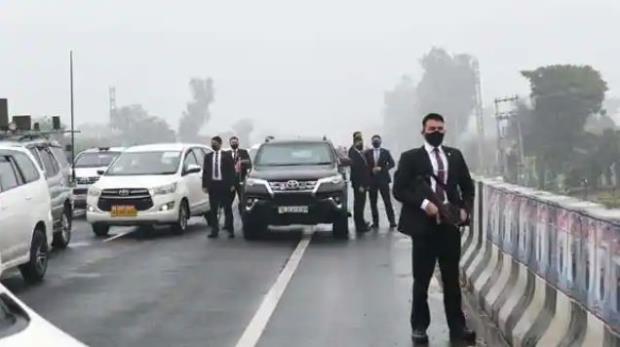 A major controversy erupted in Punjab as on Wednesday Prime Minister Narendra Modi’s rally was cancelled because of a “security lapse”.  This incident triggered a major row and BJP leaders have raised fingers at the Channi-led administration.
Let us tell you, the incident has been conspicuous because PM Modi was stopped by the mob 50 kilometres away from the India-Pakistan border and recently a tiffin-bomb was recovered from the same area. This has raised a question on the security arrangements done by the Channi government and Punjab Police.
Also Read: 'No security lapse': CM Channi refutes allegations by Centre
To this Chief Minister responded and said that there was no security lapse. The road plans for the Prime Minister were made at the last minute.
CM Channi said, “If there were any security lapses during PM Modi's visit today, then we will conduct an inquiry. There was no danger to the prime minister.”
“The farmers have been agitating peacefully for the last one year. I'm not going to lathi-charge at farmers. We spoke to farmers the whole last night after which they ended their agitation. Today, suddenly some agitators gathered in Ferozepur district,” Punjab CM said adding, “I express regret that PM Modi had to return during his visit to Ferozepur district today. We respect our PM”.
As Prime Minister was forced to return without addressing the rally Ministry of Home Affairs (MHA) in a statement alleged that there was a "major lapse in the security of PM," and that it is "taking cognisance of this serious security lapse" and has asked for a thorough report from the state government. "State Government has also been asked to fix responsibility for this lapse and take strict action," MHA added.
Also Read: 'I made it alive to Bathinda': PM Modi tells officials to 'say thanks to Punjab CM'
To this, former Punjab Chief Minister Captain Amarinder Singh has shared his reaction and said that Channi should “quit”. Capt said, “Complete failure of law and order in Punjab, CM and HM Punjab, in particular. When you cannot provide smooth passage to the Prime Minister of the country and that too just 10km from the Pakistan border, you have no right to stay in office and should quit!”