The family conflict between Govinda and Krushna Abhishek has resurfaced. Govinda's wife Sunita Ahuja has responded to Krushna's refusal to appear on a Kapil Sharma Show episode including his uncle and his family. 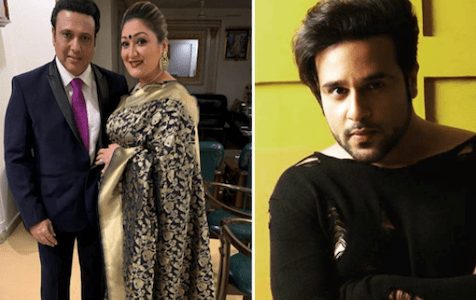 Govinda's wife Sunita Ahuja has reacted after the actor and comedian Krushna Abhishek declared that he will not be appearing on an episode of The Kapil Sharma Show that will feature his uncle Govinda and his family. Govinda will appear on The Kapil Sharma Show alongside Sunita and their children Tina and Yashvardhan.

The familial dispute between Krushna and Govinda, as well as their families, has become well-known in recent years. Sunita became enraged when Krushna's wife, Kashmera, tweeted about "people who dance for money." She said Govinda was the target of the tweet.

Govinda did not reply to Krushna's absence from Kapil's show, but his wife did. “I am heartbroken beyond words to learn about Krushna Abhishek's refusal to be a part of the episode in which my family and I were guests. She informed a leading daily that he stated that both groups did not want to share the stage.
Also Read:
"Didn't Want To Be Part Of”: Krushna Abhishek Refuses to Shoot with Govinda, Sunita Ahuja in ‘The Kapil Sharma Show’

She also highlighted Govinda's statement from last year, in which he accused Krushna of making defamatory allegations but refused to go more. “I stress that we wish to keep a respectful distance, but the situation has progressed to the point where I believe it is necessary to confront the matter. Whenever we appear on the show, he mentions us in the media just for the purpose of publicity- … “Uske bagair bhi toh hamaara show hit hota hi hai, aur yeh wala bhi hoga (Our show has been hit without him and this one will do well too).”

Krushna's talent, according to Sunita, is limited to using his mama's name. “Isn't he talented enough to put on a hit show without mentioning Mama?” she wondered. She also ruled out the possibility of the rift closing. “It isn't going to happen. I declared three years ago that nothing would be resolved until I died. “You can't misbehave, disrespect, or take liberties in the name of family,” she said, “and the issues will never be healed, and I don't want to see his face again in my life.”

“I am absolutely unhappy to talk about this in public, but it is high time that the truth got out,” Govinda stated in November in his statement.He said “I read the news that my nephew (Krushna Abhishek) did not perform on a TV show to which I had been invited as a guest. He also mentioned our friendship. His message was full of defamatory remarks and was thoughtless.”

Prior to their visit, Krushna stated that neither party is interested in participating on Kapil's show together. It's a comedy programme, after all. Pata nahi kaun si baat lekar badi baat bann jaye aur phir wohi sab hoga ki aisa bol diya, waisa bol diya (You never know which statement might blow up). I didn't want to cause an issue. I'm sure the crowd is looking forward to my performance when Govinda ji is on the show, but I decided it was best not to perform.”