With 8 franchises releasing the players into the auction pool and retaining two to three players, a total of 1214 players have registered for the IPL Mega Auction Players List.

Author : Malkit Singh
Cricket fraternity around all the will be glued to the upcoming IPL Mega Auction 2022, as players from all around will be up for grabs for the franchises. With the inclusion of two new franchises i.e. Ahmedabad and Lucknow, the upcoming IPL Mega Auction 2022 is expected to be a blockbuster with various teams going up against each other to sign their choice of players. Now, let's have a look at the players who have kept their base price of INR 2 crore as reported by ESPNcricinfo:
Players base price at IPL Mega Auction 2022
With 8 franchises releasing the players into the auction pool and retaining two to three players,  a total of 1214 players have registered for the IPL Mega Auction Players List. The list of international players who have kept their base price of INR 2 crore are David Warner, Mitchell Marsh, Pat Cummins, Adam Zampa, Steven Smith, Shakib Al Hasan, Mark Wood, Trent Boult, Faf du Plessis, Quinton de Kock, Kagiso Rabada, Dwayne Bravo, Josh Hazlewood, Sam Billings, Mustafizur Rahman and more.
While Indian players who have kept their base price at INR 2 crore include Shikhar Dhawan, Shardul Thakur, R Ashwin, Yuzvendra Chahal, Deepak Chahar, Ishan Kishan, Dinesh Karthik, and more.
Also Read: KL Rahul will emerge as a phenomenal leader: Sanjiv Goenka
Check out the full list of players under INR 2 crore bracket here- 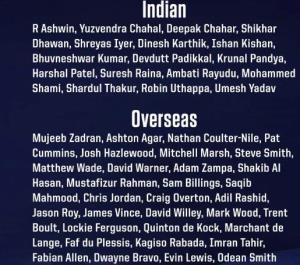 IPL Mega Auction 2022
After the inclusion of two new franchises, the Indian Premier League is all set to conduct a Mega Auction before the start of the 2022 season. As per the report, a total of 1,214 players have submitted their names for IPL 2022 mega auction, which is scheduled to be held in Bengaluru on February 12 and 13. Of those 1,214 players, 896 are Indians and 318 are overseas players. As per an official release of the BCCI, the list includes 270 capped, 903 uncapped, and 41 associate players from 10 different nations.
Australia (59) has registered the most number of players for the upcoming mega auction, followed by South Africa (48) and West Indies (41). Apart from the usual suspects in the form of England, New Zealand, Afghanistan, Sri Lanka, and Bangladesh, players from Nepal, the United States, Ireland, and Zimbabwe have also registered their names for the auction.