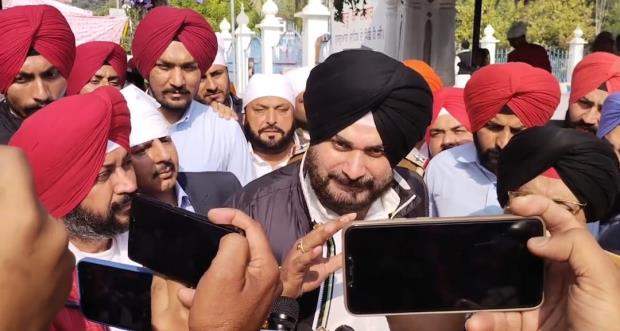 On the occasion of Guru Purab, the Congress leader paid obeisance at Gurdwara Ber Sahib. Sidhu after visiting the gurdwara with party MLA Navtej Cheema, said "happiness is in the air of Punjab today." Entire Punjab is celebrating Guru Nanak Dev Jayanti and lauding the Central government's decision to repeal the black laws.

“We’ll talk about the betterment and development of Punjab, but today let us appreciate the decision taken by them (Modi government),” Sidhu said.

Sidhu while interacting with the media, said, “If one realises his mistake and apologises on the occasion of Guru Nanak's Parkash Purab, then Punjab should forgive. A new chapter is going to begin in Punjab," Sidhu added.

The cricketer-turned-politician further said that “no one should claim credit for this; it is entirely the result of Samyukta Kisan Morcha's satyagraha. They were fighting on the side of truth and adhering to Guru Nanak's work culture principles, which he had learned from his 17 years of farming."

“They may have lost 650 men, but they taught the entire country about brotherhood and unity in diversity," he added.

Further talking about Punjab's role in the betterment of farmers, Sidhu stated "It has become critical that we give a proper roadmap to make agriculture stand out again."

" We must assist them in increasing their productivity. Farming, which has been in decline for the past 25 years, must be revived as a viable business."

"The farmers' real challenges will begin when they return from the morcha. Farmers have won the year-long morcha, but we need to devise strategies to help them prosper," he added.

"Only righteousness, moral authority, and high integrity can be used to build a government. Those who seek shortcuts such as instant coffee and make 500 promises in two months and fail to keep even two, are pushing themselves far beyond their limits."