Victory celebrations were seen at the border which has been the centre of the farmers’ protest. 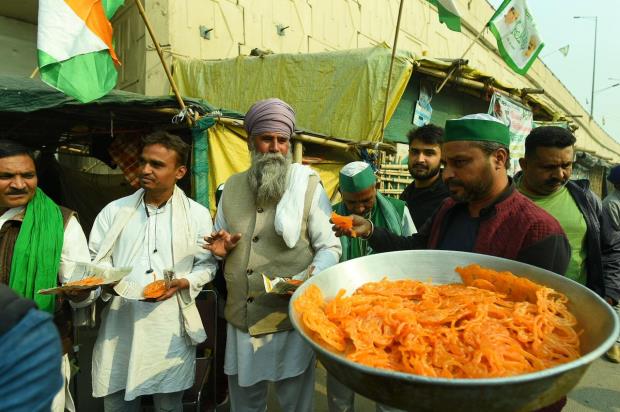 A wave of celebration and happiness erupted at the Ghazipur border on Friday morning after prime minister Narendra Modi announced repealing of the three contentious agricultural legislations.

Ghazipur border is one of the landmark protest sites at Delhi’s border. Even though Modi’s decision has been hailed and welcomed, Bharatiya Kisan Union (BKU) which is leading the protest at Ghazipur has said that the protest will not be withdrawn immediately, until the laws are repealed in the Parliament.

The most happiest at the moment are the agitating farmers who have been protesting at the border against the laws since last November and many have called it a tribute to those farmers who lost their lives during the demonstration.

Victory celebrations were seen at the border which has been the centre of the protest. Farmers gathered at the Ghazipur border and celebrated the announcement with ‘jalebis’ and many were seen distributing sweets to each other, while some from young and adults were also seen dancing joyously to celebrate the moment. The farmers had a sign of relief, joy and victory on their faces who were not ready to accept anything less than the repeal of the three farm laws.
Also Read: From repealing Farm laws to Kartarpur Corridor reopening- Punjab enjoys a gratifying week

BKU spokesperson Saurabh Upadhyay told the media, "We had two main demands. All three black farm laws were repealed and a legal guarantee ensured for minimum support price (MSP) for crops through a new law. Our protest will continue till both demands are met.”

Addressing the nation on Friday, PM Modi on the occasion of Guru Nanak Jayanti said the three farm laws were for the benefit of farmers but added that "we couldn't convince a section of farmers despite best efforts". He announced that keeping the constitutional process in mind the government has decided to repeal the laws that would be taken up in the winter session of the Parliament which starts from 29 November. Apologising to the country, PM Modi appealed to the protesting farmers to return to their homes and assured them that the government will continue to work for their well-being. He further added that the goal of the three farm laws was to empower farmers, especially small farmers.

Sunil Pradhan, a BKU office-bearer from Gautam Buddh Nagar district, said the crowd at Ghazipur will swell later today as many people have gone to Garh Mukteshwar to attend the Kartik fair and take a dip in the Ganga river.

"Celebrations have already begun here at Ghazipur. But this just half victory as other issues, including the law on MSP is yet to be announced," he said.

The BKU says further decisions on the protest will be taken by the Samyukt Kisan Morcha (SKM) and informed that a  meeting date will soon be fixed. BKU is part of the SKM, which is a farmers' collective body that has been leading the protest at Delhi's borders. The leaders of the SKM have welcomed that Modi’s move and in a statement said that they would keep taking it’s as a complete victory only after the laws are repealed in the parliament.