The Indian women's cricket team may have suffered an 18-run defeat (as per DLS rules) in the rain-hit first T20 International against England, but Harleen Deol's fielding captivated everyone. 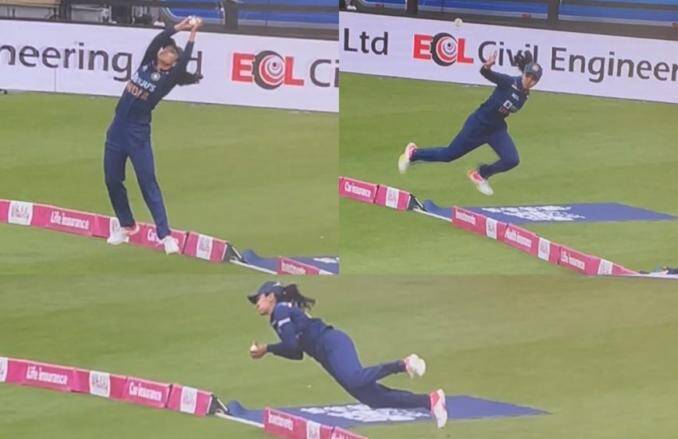 The Indian women's cricket team may have suffered an 18-run defeat (as per DLS rules) in the rain-hit first T20 International against England, but Harleen Deol's fielding captivated everyone.


The Indian women's cricket team may have suffered an 18-run defeat (as per DLS rules) in the rain-hit first T20 International against England, but superwoman Harleen Deol's fielding captivated everyone. Harleen took a very brilliant catch like a superwoman on the boundary line.

Harleen Deol was fielding at long off. England wicketkeeper Amy Jones was on strike. Shikha Pandey bowled Amy. Jones played in the deep. Everyone including Jones thought that his shot would fall straight across the boundary. The same thing would have happened, but Harleen Deol dashed their hopes. She jumped in the air to catch the bowl.

Unfortunately, there was only a few centimetres between the Harleen and the boundary rope. Harleen realised this immediately. Harleen thought if the ball was not released at the right time, it would be a six. Harleen tossed the ball into the air and jumped outside the boundary herself, but momentarily again dived inside the boundary and took a brilliant catch while flying like a superwoman. Seeing that Harleen not only saved a six, but also showed Amy Jones the way to the pavilion, the entire team rushed towards her to congratulate her! And yes! It was definitely one of the best catches of all time. Even the England team was shocked. Daniel Watt was also seen applauding Harleen for her efforts.

Sachin Tendulkar wrote,"This was a brilliant catch @imharleendeol.Definitely the catch of the year". 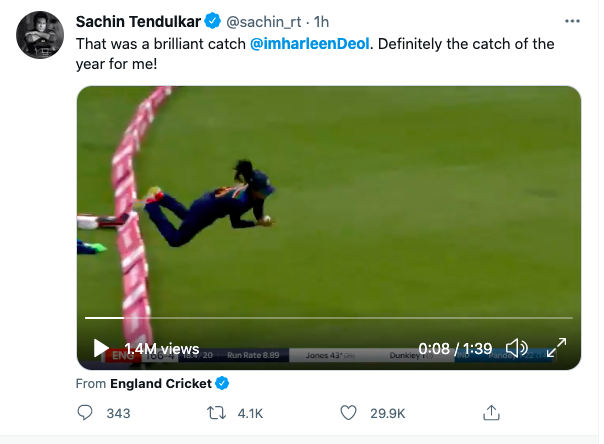 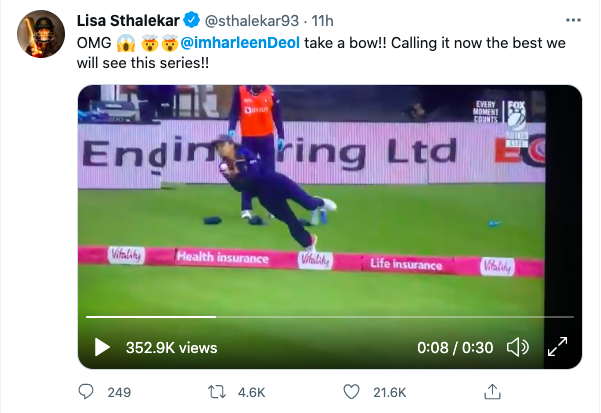 Lisa Sthalekar said,"OMG @imharleendeol take a bowl. calling it now the best we will see this series". 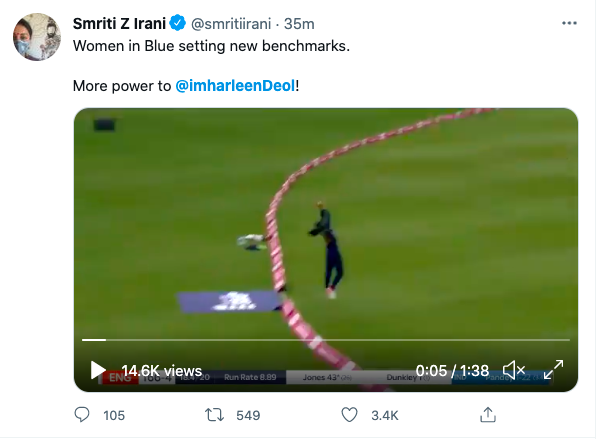 Shikha Pandey was the most successful player from India. She took 3 wickets for 22 runs in 4 overs. She took these three wickets in the 19th over. Chasing the target, India got off to a bad start. India’s first wicket in the form of Shefali Verma fell for zero on the second ball.

After this, Smriti Mandhana and Harleen Deol put on 44 runs for the second wicket.

Mandhana was dismissed for 29 runs in 17 balls with the help of 6 fours. Harmanpreet, who came at her place, returned to the pavilion after scoring one run.

After this Deepti Sharma came to bat. Deepti and Harleen had added 7 runs for the fourth wicket when the rain came. The result of the match was drawn by DLS as the rain did not stop for the stipulated time, with England winning the match by 18 runs.