Suryakumar Yadav became the first Indian batter to score 1000 runs or more in a calendar year during the 2022 season Author : Tushar Singh 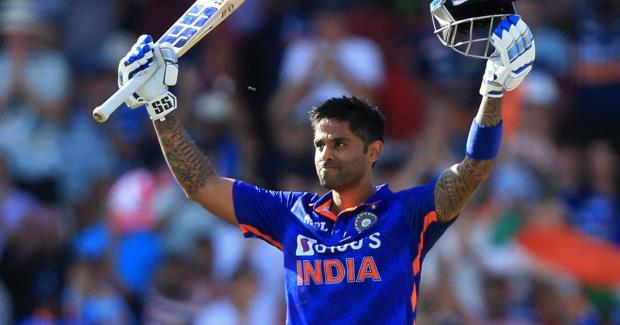 The Indian dynamo ended the blockbuster season on a high in the game’s shortest format and has been rewarded with the ICC’s top prize being named Men’s T20I Cricketer of the Year.

Suryakumar Yadav became the first Indian batter to score 1000 runs or more in a calendar year during the 2022 season. The Indian batter had also dethroned Pakistan's Mohammad Rizwan by becoming the new No.1 batter in the ICC T20I rankings last year.

Featuring one of the best seasons by any player in the international circuit, SKY smashed 1164 runs in 31 matches at an average of 46.56. The Team India superstar also possessed an explosive strike rate of 187.43 during his remarkable 2022 season. The MUMBAI-born lad smoked 68 sixes in total which stands for the most by any batter in a year.

Suryakumar Yadav after being named for the format’s top award by the ICC said, “It's a great feeling and 2022 has been amazing for me. From a personal point of you - I really enjoyed a few knocks I played that year. And If I had to pick one knock which I feel was special and very close to me, was my first hundred for my country. Because the first hundred is always special. Hopefully, many more knocks to come. Thank you.”

After a fruitful campaign at the T20 World Cup and the entire year, He also began the new year on a fine note smashing a quickfire 100 against the Kiwis on their home. Suryakumar was crowned as the top-ranked batter in the ICC Men's T20I Player Rankings after the T20 World Cup.

SKY has slammed 3 centuries and 13 half-centuries in his T20I career so far. Featuring 45 matches for India the MI star batter has amassed 1578 runs in 45 T20Is for Team India. Suryakumar made his T20I debut against England at the Narendra Modi Stadium in 2021, with a high and handsome six against the England premier speedster Jofra Archer.