The Taliban insisted that this time things will be different, they are more developed and will adopt a moderate stance towards women of Afghanistan. 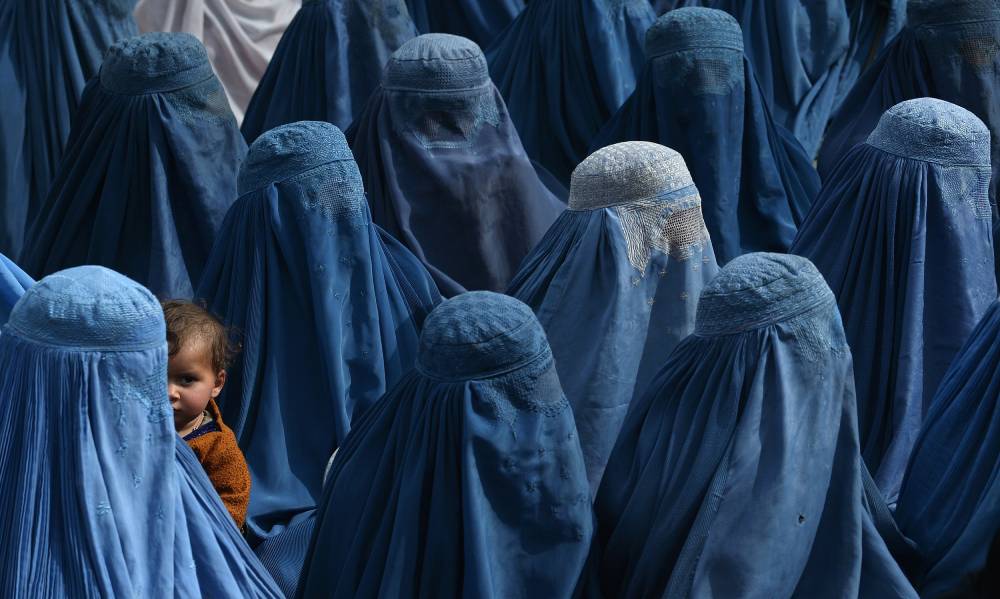 Women in Afghanistan were generally kept under the harsh and stringent rule, in the previous Taliban regime. They were not permitted to leave homes except under certain conditions that were considered inhumane. Those who dared to not follow those rules were publicly beaten, tortured and even executed. Meanwhile, it’s been over a week now after the extremist group has recaptured the nation, leaving Afghan women fear for their lives. They believe their freedom will again be nipped.
The Taliban, however, proclaimed that women will be allowed to work, girls will be free to attained education and pursue whatever they want, but within the perimeters of Islam, mostly the set of rules that would be interpreted by their government.
The Taliban insisted that this time things will be different, they are more developed and will adopt a moderate stance towards women of Afghanistan.
Despite all the promises, the early signs look contrary and the model of imposing restrictions continued on Tuesday when a Taliban spokesperson stated that women should stay inside the home, at least for now.
The reason given by the spokesperson was that the militants have not yet been trained to not hurt women. He has urged working women to stay at home until a proper system is placed to ensure their safety.
The spokesman, Zabihullah Mujahid has called the restrictions a “temporary procedure”.
During the previous Taliban rule in Afghanistan, a brutal version of Islamic law was imposed that mainly made women’s lives miserable.
Speaking on Afghan women's current situation, he said that the restrictions would be short-lived.
"Our security forces are not trained (in) how to deal with women - how to speak to women (for) some of them," Mr Mujahid said.
"Until we have full security in place... we ask women to stay home."
“We are worried our forces who are new and have not yet been trained very well may mistreat women,” Mr Mujahid said.
“We don’t want our forces, God forbid, to harm or harass women.”

Urging women to stay at home until new procedures are created, Mr Mujahid informed that “their salaries will be paid in their homes.”

His statement supported what Ahmadullah Waseq, the deputy of the Taliban’s cultural affairs committee said to the media, that the Taliban had “no problem with working women,” on the condition that they wore hijabs.
He, however, asserted that: “For now, we are asking them to stay home until the situation gets normal. Now it is a military situation.”
The UN has underlined "credible" reports of abuses by the Taliban, distinctly restrictions on women. Meanwhile, UN Human Rights High Commissioner Michelle Bachelet on Tuesday stated that women’s rights in Afghanistan were a "fundamental red line".
Apart from expressing concerns over women’s rights, Ms Bachelet also pointed out that she had received reports that children were being recruited as soldiers and summary executions were done by the Taliban fighters.
Ms Bachelet was speaking at the emergency meeting of the UN Human Rights Council called in Geneva to discuss the deteriorating condition of women in Afghanistan. Later, the council approved a resolution declaring its "unwavering commitment" to provide rights and freedom to Afghan women and girls. But, the council didn’t reflect on what the human rights organisations have been asking for above all - the resolution did not suggest the appointment of a special UN investigator for the war-torn nation.
Between 1996-2001, when the Taliban reigned over Afghanistan, women were prohibited to have jobs, leave homes without a male member, and fully cover themselves with burqas. They were not permitted to attend schools, most schools and educational institutes were demolished. While women who were found violating morality codes were punished and publicly flogged, for example, they were killed if they committed adultery or went out revealing their body parts.
Since the return to power, the assertions that the restrictions on women’s movement are momentary is nothing new for Afghan women, similar claims were earlier when the Taliban ruled over Afghanistan and controlled the people’s lives, said Heather Barr, the associate director of women’s rights at Human Rights Watch.

“The explanation was that the security was not good, and they were waiting for security to be better, and then women would be able to have more freedom. But of course, in those years they were in power, that moment never arrived — and I can promise you Afghan women hearing this today are thinking it will never arrive this time either.”
Brian Castner, a senior crisis adviser at Amnesty International who until last week was in Afghanistan has said that if the Taliban are intentional in treating women rightfully, then they have to retrain their forces. “You can’t have a movement like the Taliban that has operated a certain way for 25 years and then just because you take over a government, all of the fighters and everyone in your organization just does something differently,” he added.
There is no hint from the Taliban that any of the promises made will be executed, Mr Castner said, adding that he doesn’t believe they would even stand by the promises of moderation and just rules for women.
Amnesty International has got reports of fighters searching people knocking on every door who worked with the previous government and helped the US troops, despite their leaders vouching that no retaliation will be done.
“The rhetoric and the reality are not matching at all, and I think that the rhetoric is more than just disingenuous,” said Mr Castner.
“If a random Taliban fighter commits a human rights abuse or violation, that’s just kind of random violence, that’s one thing. But if there’s a systematic way of going to people’s homes and looking for people, that’s not a random fighter that’s untrained — that’s a system working. The rhetoric is a cover for what’s really happening,” he further stated.
On Wednesday, in some parts of Kabul women were seen going out “with normal clothes, as it was before the Taliban,” where Taliban militants presence was insignificant whereas in central areas where the fighters were heavily stationed only a few women tried venturing out and those who did were wearing burqas.
Ms Barr, of Human Rights Watch, said she, like other Afghan women, is sceptical over the Taliban claims of preserving women’s rights “within the bounds of Islamic law,” when its government will be formed.

“They’re trying to look normal and legitimate, and this will last as long as the international community and the international press are still there. And then we’ll see what they’re like again,” she said, adding it may not take long for them to show their true intentions.

The Taliban has tried to convey a more moderate tone of itself, promising freedom of speech and rights to be given to women and girls. But the Afghan women seem no to trust them, given the age-long oppression and barbarity they imposed earlier. Women desperately want to escape Afghanistan, as they believe their freedom will be taken away.
However, the fighter’s actions don’t coincide with the words spoken. Women television anchors and journalists in Kabul were told to go home saying women should not work, while in other areas many female employees have been asked to quit their jobs and were replaced by men.
Several videos showed Taliban militants painting the pictures of women displayed on shops, C0-Education institutes are already closed down, women are commanded to not reveal their sandals and not come out in public without a burqa and a male guardian. Reports also said that women were being exported in coffins as sex slaves and many are already killed.