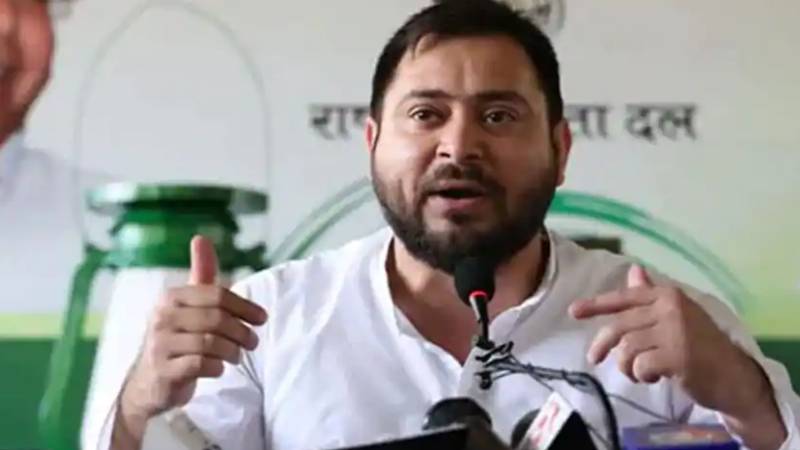 RJD leader Tejashwi Yadav said here on Monday that his party will hit the streets if the NDA doesn't meet its poll promise of providing 19 lakh jobs in the next one month.

Tejashwi, reached the Bihar assembly on day one to take oath as an MLA along with his elder brother Tej Pratap Yadav.

"The assembly election was fought on the issues of unemployment and corruption. We had promised to provide 10 lakh jobs in the first cabinet meeting. The NDA, in the joint Sankalp Patra, also claimed to provide 19 lakh jobs. Now, they have formed the government in Bihar through conspiracy. As real representatives of people of Bihar, we will not let them go scot-free without implementing their poll promise," said Tejashwi.

"In the last 15 years, Nitish Kumar has turned into the Bhishma Pitamah of corruption. Around a dozen of his cabinet ministers are either involved in corruption or facing criminal charges. As many as 60 scams took place during his government in last 15 years," alleged Tejashwi.

"These scams are investigated by many IPS and IAS officers and some of them have written letters to the authorities for proper investigation," said Tejashwi, alluding to letters written by Amitabh Kumar Das, a retired IPS officer, who has written letters against Mewalal Choudhary and Manju Verma.

"The selection of ministers is the only decision of Chief Minister. Didn't he know the criminal charges on tainted Mewalal Choudhary? He has been an absconder in the past. The governor of Bihar had sacked him from the post of Bihar Agriculture University Vice chancellor. Still Nitish Kumar gave the important education ministry to him. Now, Nitish Kumar has given the education ministry to Ashok Chaudhary whose wife is involved in multi-crore scam. The CBI had registered a case against her and matter in pending in Supreme Court," Tejashwi said.

"Over the last few years, Nitish Kumar used to claim that elections were fought on his face. The people of Bihar rejected him in the 2020 assembly election. That's why his party came at third position. Despite being at third position, he has become CM. They conspired against the RJD in this election, still it became the single-largest party in the assembly with 75 seats and 23.5 percent to votes," added Tejashwi.