‘Trollhunters: Rise of the Titans’ Review- Beautiful Conclusion To The Arcadia Saga

Trollhunters started out as an animated feature picture, so it's only natural that the Tales of Arcadia trilogy would end with one as well.

Trollhunters: Rise of the Titans is a Netflix Original Film by Dreamworks Animation, based on Guillermo del Toro's Netflix series Trollhunters, 3Below, and Wizards. Trollhunter Jim Lake (Emile Hirsch) is drawn into a battle against the Arcane Order, who seek to awaken three Titans who will remake the world and in the process cleanse it of humanity. 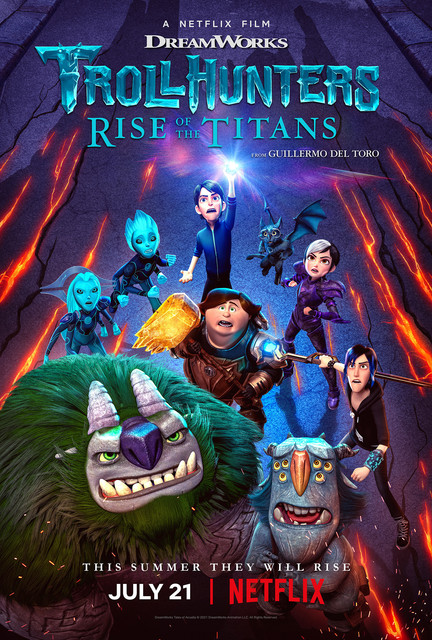 Trollhunters started out as an animated feature picture, so it's only natural that the Tales of Arcadia trilogy would end with one as well. What strikes me as particularly impressive is how Rise of the Titans is simultaneously welcoming to newcomers and a love letter to long-time fans of the Arcadia saga.

A dual narrative from Jim and his troll mentor Blinky (Kelsey Grammar) summarises the events of all three series thus far. Few creatives could handle combining characters and plot strands from three distinct television shows, but del Toro and his team are more than up to the effort.
Also Read: 'The Bachelorette' alum Kaitlyn Bristowe shares vulnerable posts, gets bullied by fans

Jim is the character with the most screentime and character development, which is appropriate given that he is the one who kickstarted the Tales of Arcadia storey. Jim strives to prove that he is still a hero after losing his Trollhunter amulet and skills following the events of Wizards. He is pushed through a lot in the film; without magic armour and weapons, he is more susceptible to injury.Despite the fact that he is outclassed by the Arcane Order's warriors, he continues to fight. And he gets a very amazing final fight sequence, reinforcing that he'll always be a Trolhunter no matter what.

The action sequences and aesthetics in Rise of the Titans are also noteworthy. The Titans are the most amazing moments I've seen in an animated picture since Spider-Man: Into The Spider-Verse, thanks to directors Johane Matte, Francisco Ruiz Velasco, and Andrew L. Schmidt.They lumber through the planet, leaving a trail of destruction in their wake, crafted out of gigantic blocks of ice, moss-covered stones, and a genuine volcano. A battle between a Titan and an Akridion robot controlled by Varvatos Vex (Nick Offerman) also serves as a love homage to del Toro's Pacific Rim, complete with a Hong Kong location.

Due to the fact that this is a feature film, the visuals are also clearer and more tangible than in the Tales of Arcadia series. The scars on Jim's face, the stony texture of Blinky and AAARRRGGH!! skin, and even the faint glow that Krel and Aja give off while in their Akridion forms will all be visible to viewers.Different characters' clothing/armor/powersets were also coloured differently: Jim wore predominantly blue, Toby wore red and orange, and Claire wore purple. It's a nice approach to distinguish between all of the characters' distinct skill sets while also providing a lovely colour palette.


Trollhunters: Rise of the Titans is a stunning and heartwrenching climax to Guillermo del Toro's Tales of Arcadia series, and it's a must-see for old and new fans alike. With the release of this film, I am confident in stating that the Tales of Arcadia saga is worthy of being listed alongside Avatar: The Last Airbender and Justice League Unlimited when it comes to fantastic animated films.