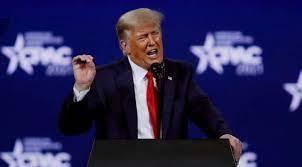 Former US President Donald Trump has alleged that China is responsible for the pandemic and it should cough up $10 trillion to the world. On Friday, in a statement, Donald Trump said that China must compensate for the damage caused due to the coronavirus.

Trump stated that “China should pay $10 trillion to the US and world for death and destruction they have caused.”

Trump added, “Now everyone, even so-called enemies has begun to say that President Donald Trump was right about coronavirus coming from Wuhan Lab of Virology.”

This is not the first time when Trump has alleged that China is responsible for the pandemic, he has mentioned the same in past events as well. During the presidential election last year he claimed that he has evidence that Coronavirus is the biological weapon of China.

Donald Trump also targeted Dr Anthony Fauci, who was a member of the Corona Task Force during the time of Trump’s Administration. On several occasions, a rift between Trump and Anthony was reported.

Anthony urged people to wear a face mask, maintain social distancing and follow the Covid protocols, on the other hand, Trump always said that it is a man-made virus and would not wear a face mask. In a statement, Trump even said that he has saved the lives of the people of the USA by not obeying Anthony.

In the recent statement, Trump has alleged that Dr Fauci knew the reality of the origin of coronavirus but he avoided it and did not reveal it in front of the world.

Recently, in an interview, Dr Fauci has demanded to see the medical reports of the scientists, who were hospitalized in November 2019, with the same symptoms as coronavirus. He said from this we can find out the origin of coronavirus.

Get the latest update about china should pay compensation, check out more about world News, Former US President Donald Trump, china virus & China cough up 10 trillion to the world