After Supertech's illegal twin towers -- Apex and Ceyane -- in Noida were successfully reduced to dust in a matter of a mere nine seconds on Sunday, the team of Edifice Engineering and others kicked-off the post-demolition work. 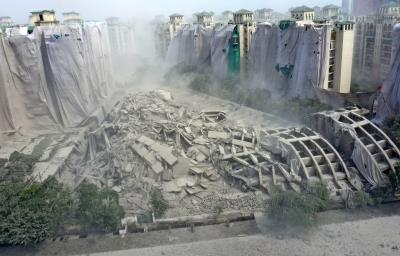 After Supertech's illegal twin towers -- Apex and Ceyane -- in Noida were successfully reduced to dust in a matter of a mere nine seconds on Sunday, the team of Edifice Engineering and others kicked-off the post-demolition work.

The teams of Edifice Engineering, Jet Demolitions, the CBRI, and Noida officials have started to analyse and survey the adjacent buildings, as well as the rubble left after the demolition.

The twin towers were demolished using a controlled implosion technique at 2.30 p.m. on Sunday. It took nearly eight months of hard work and determination to demolish the twin towers worth nearly Rs 800 crore. As per an estimation, a total of Rs 17 crore has been spent on the demolition exercise, which will be borne by the builder.

The towers, which were built in nine years ago, took just nine seconds to be reduced to dust and rubble. After the demolition was completed, NOIDA CEO Ritu Maheshwari said that the exercise was carried out as per the plan.

She added that the cleaning of the area is being done, and gas and electricity supply will be soon restored in the area while people will be allowed to enter the neighbouring societies after 6.30 p.m.

Maheshwari said that while no damage to the nearby buildings has been seen yet, however, the final observation will be made later.

Nearly 500 police and traffic personnel were deployed around the twin towers to carry out the demolition exercise safely. The Noida-Greater Noida Expressway remained shut between 2.15 p.m. and 2.45 p.m., while a no-fly zone was instated over the city for drones.

Vinay Singh, an assistant working with Indian blaster Chetan Dutta, who pressed the last button for the blast, told IANS that the operation was completed successfully. He said that months of hard work and dedication has come to an happy end today with the fall of the towers.