The action drama Sanak is said to be a remake of the 2002 American film John Q. 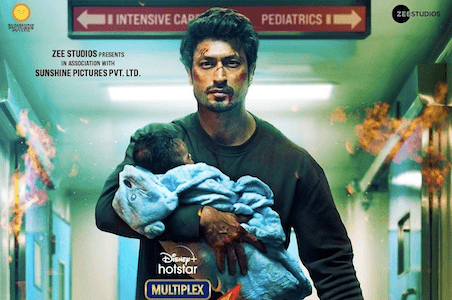 Sanak - Hope Under Siege, starring Vidyut Jammwal and Neha Dhupia, has finally released its trailer. Vipul Amrutlal Shah directed the film, which was produced by Zee Studios and Sunshine Pictures. The film also stars Rukmini Maitra and Chandan Roy Sanyal. The action drama is said to be a remake of the 2002 American film John Q. It will release on Disney+ Hotstar on October 15, 2021. Fans reacted positively to the performers' performances almost immediately after the trailer was published. See trailer here.
Also Read: Vidyut Jammwal: Everyone should celebrate Sidharth's life
Vidyut is seen chatting to his wife, who is having a heart operation, and she is taken to the operating room in the trailer. Then, out of nowhere, armed guys invade the hospital and begin murdering patients. However, the
lead actor Vidyut attempts to flee and begins to kill his guys one by one. He is attempting to contact his wife and has even promised to do so. Neha, on the other hand, is seen entering the building. She is a police officer who is attempting to get the situation under control. It'll be fascinating to watch how Vidyut saves his own, his wife's, and others' lives.
Also Read: 'A Thursday’: Neha Dhupia dons role of a pregnant cop in 8th month of her pregnancy
Vidyut was portrayed completely injured on the film poster that was released earlier. In one hand, he was carrying a baby, and in the other, he was clutching a pistol. He had a determined expression on his face, as if he was ready to confront the issue head on, whatever the difficulties.
Sanak is an action-packed picture with an emotional journey that tells the narrative of a hospital under siege, according to the filmmaker. “It's a hostage situation. It would be fascinating to watch all of the action and drama develop in a hospital that is under siege,' he was reported as adding.