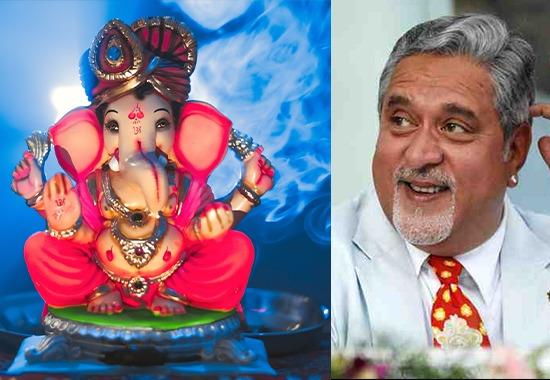 However, Vijay Mallya's Ganesh Chaturthi wish did not go down well on social media as netizens started trolling the fugitive businessman and also sent him a reminder of SBI. One user wrote that she will not accept his Ganesh Chaturthi wishes until he comes back to India. Another user shared a photoshopped image of SBI asking the fugitive businessman to return the money.

🤣🤣🤣🤣🤣 I have laughed twice today looking at your tweets. You are terrific ♥️

Coming to Vijay Mallya's case development, the Supreme Court last month sentenced the fugitive businessman to 4 months of imprisonment in a contempt of court case. Mallya, residing in the United Kingdom since March 2016, was convicted for contempt of court on May 9, 2017, for not truthfully disclosing his assets and transferring $40 million to his children in violation of the SC's order.

Mallya is facing serious charges of fraud and money laundering pertaining to the amount borrowed by Kingfisher Airlines (KFA) from several Indian banks. He has been out on bail in the UK since his initial arrest in April 2017. In 2019, he became the first person to be declared a fugitive economic offender on a plea of the Enforcement Directorate. On April 20, 2020, the High Court of Justice of the UK dismissed his plea against his extradition to India.