Those injured in the incident are said to be stable. 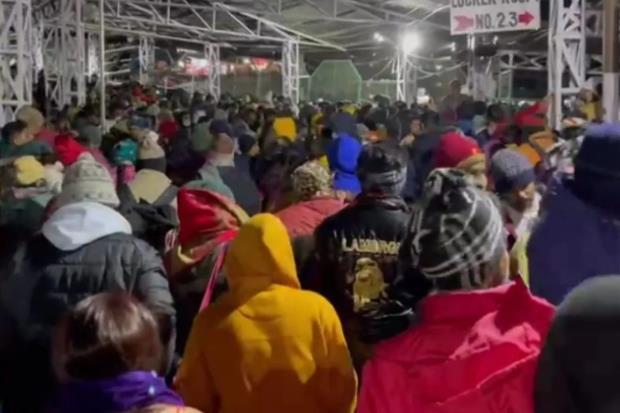 In an awful start to 2022, as many as twelve people were killed and 15 injured on Saturday in a stampede at the Mata Vaishno Devi shrine in Jammu and Kashmir's Reasi district. According to the latest reports, negligence by security officials to clear the way for a VIP led to the tragic incident. A high-level probe has been ordered in the matter.
Earlier, we had reported that “an argument broke out among some young boys near gate number three outside the sanctum sanctorum of the shrine, which led to people pushing each other. Consequently, a stampede occurred."
However, now the latest report from leading Hindi daily Dainik Bhaskar claims that the stampede occurred as security officials positioned at the shrine started threatening and forcing people to clear the way for a VIP person.
Talking to an eyewitness, the media outlet reported that the incident occurred at around 2:45 am on January 1, 2022. "After paying respect at the shrine, I was returning from gate number three. The pavement, however, was clogged with people, leaving no room for movement. Meanwhile, the officials who were in charge of the arrangements acted very irresponsibly," the eyewitness was quoted saying.
"Instead of slowly moving the crowd, they began intimidating people with sticks. They were heard saying that a VIP was coming and that they needed to clear the way as soon as possible. People began pushing each other out of fear. During this, some people fell on the floor and passed out,” he claimed.
This information has not been confirmed or investigated by True Scoop.
Also Read: Vaishno Devi stampede: Here's what happened at shrine that led to death of 12 people
In the meantime, temple officials report that a stampede erupted when a huge number of devotees entered the Mata Vaishno Devi Bhawan without permission slips to celebrate the new year.
"One group coming from the opposite direction wanted to make a U-turn to re-enter the shrine, which ended in a skirmish and triggered the stampede," according to sources.
Furthermore, of 15 injured people who were rushed to the Devi Narayana Superspeciality Hospital after the incident, 4 were admitted to ICU and 11 people were stable (out of which 3-4 people were discharged). "Around 5 are still under treatment," said Dr JP Singh, Neurosurgeon at the Hospital.
Dheeraj Kumar (26), Shweta Singh (34), Viney Kumar (24), Sonu Pandey (24), Mamata(38), Dharmveer Singh(35), Vaneet Kumar (38) and 30-year-old Arun Partap Singh are among those killed in the incident.
Shri Mata Vaishno Devi Shrine Board Helpline nos:
01991-234804
01991-234053
Other Helpline nos:
PCR Katra 01991232010/ 9419145182
PCR Reasi 0199145076/ 9622856295
DC Office Reasi Control room
01991245763/ 9419839557