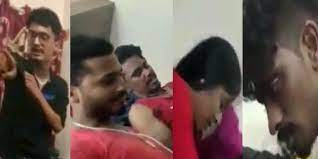 A viral video clip of a woman being thrashed and sexually assaulted in Assam has led to the arrest of the accused- four men and a woman. The police have confirmed the incident occurred in Bengaluru around 15 days ago and preparators were arrested on Thursday evening.

The gang had recorded themselves torturing the victim and shared the video clip with friends in Assam and West Bengal.

When the video went viral, the North East police along with their counterparts in Bangladesh initiated the probe in the matter. Following the chain of forwards, police were able to trace the originator number of the video to a mobile phone in Bengaluru. The Bengaluru city police were alerted and special teams were able to track down the gang within hours.

The perpetrators were arrested in a rented house at Avalahalli, Ramamurthy Nagar where they had tortured the girl. They are identified as Sagar, Mohammed Baba Sheikh, Ridoy Babu and Hakeel and the identity of the woman is not revealed yet.

Moreover, the police are unable to trace the victim who is believed to be from Bangladesh. Also, the Bangladesh police had revealed that at least one of the perpetrators hail from Dhaka in Bangladesh.

“Our initial probe has revealed that the gang brought her illegally into the country by promising her a job. Instead, they forced her into prostitution. She was able to escape but they hunted her down. When they found her, they tortured her brutally and violated her before circulating the video,” a senior police official revealed.

Get the latest update about india breaking news, check out more about ACCUSED ARRESTED, Viral video in Assam, victim from Bangladesh & current news in india