Jacob Funk Kirkegaard, a senior fellow at the German Marshall Fund, appeared on Bloomberg for live but he was interrupted by his son, who tried his best to grab attention. 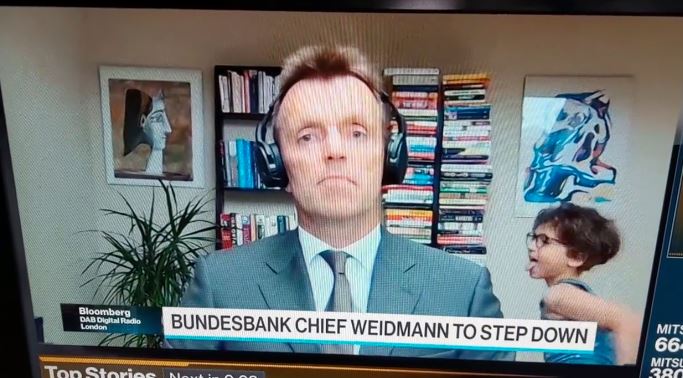 Global pandemic Covid-19 has introduced working from home and live interviews. During interviews, family members become a source of humiliation, sometimes. One such incident happened with Jacob Funk Kirkegaard, a senior fellow at the German Marshall Fund, who appeared on the Bloomberg live TV to discuss the resignation of Jens Weidmann, the president of Bundesbank.

The expert was seriously explaining the impact of the German finance industry, his son stole the show by walking into the frame. His little son appeared in the background, dancing and jumping and making faces at the camera, to grab the attention.

These activities prompted the TV host to ask, “Does your son work for the Greek government?” Realising that his son is behind, Mr Kirkegaard laughed and replied, “children are difficult to suppress”.

The video of the incident was shared by a Twitter user and while sharing the video, he wrote, “Impressive job by this young man on @BloombergTV this morning. Proves what I've always said: Every report about the Bundesbank should include goofy dancing kids in the background!”

The video was loved and praised by many netizens. One of the netizens wrote, “I love this - this is going to be up there with the @BBC video! Not only is Jacob’s son a star - we have seen him before on @gmfus calls, but clearly never the full version Jacob @jfkirkegaard, as always, keeps totally cool!”

Also Read: Kerala couple braves flood in a cooking vessel to get hitched

Yet another wrote, “This kid out here trolling his dad is sublime performance art”.

And the third one commented, “This kid video bombing his dad’s interview is how I imagine Victorians feel about doing any more lockdowns or zoom meetings.”