Watch: Priyanka Gandhi sweeping floor of guest house where UP cops detained her

The video has been released by the Congress leader’s team from the guest-house. 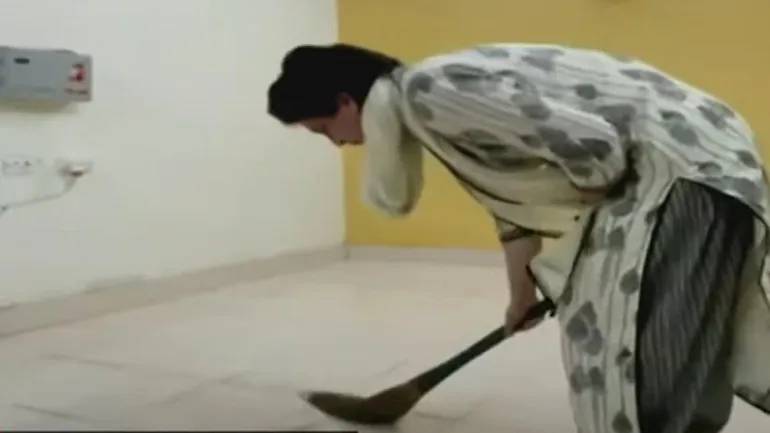 Priyanka Gandhi Vadra was arrested last night and has been detained at Sitapur on her way to violence-hit Lakhimpur Kheri.

Sitapur is 90 km away from Lucknow and has been kept at a guest house.

In a video circulating, Priyanka Gandhi is seen sweeping the floors of the guest house.


The video has been released by the Congress leader’s team from the guest-house.

Priyanka was hedging to Lakhimpur Kheri to meet with the families of those farmers who had been killed during the violence that occurred on Sunday evening when she was detained by the UP police.

In the video shared by Priyanka Gandhi’s team, she is seen sweeping the floor of a room in the PAC (Provincial Arms Constabulary) Guest House. Her team member told NDTV that she was cleaning the room where has been lodged as it was dirty.

Congress workers have staged protests outside the centre against her detention.

The Congress party has accused UP police of using physical force against Priyanka Gandhi and Deepender Hooda.

Along with Ms Gandhi, a group of Congress leaders were detained on early Monday morning on their way to Lakhimpur Kheri where 8 people died on Sunday after violence erupted after Union minister Ajay Mishra’s son allegedly ran over a group of farmers protesting.

Four farmers were killed after a vehicle ran over them while four others died in clashes that took place later, resulting in tension in the area.

In another video, Priyanka Gandhi is seen arguing with UP cops demanding to see a warrant to explain their detention when the police officials surrounded her convoy at Sitapur. The party has also alleged that the leaders were manhandled during the quarrel.

"I am not important than the people you have killed. The government you are defending. You give me a legal warrant, a legal basis or else I will not move from here and you won't touch me," the disturbed Priyanka Gandhi was heard saying in a video.

"Warrant nikalo, order nikalonahi toh main yahan se nahi hil rahi hoon (Produce a warrant or a legal order or else I am not moving out from here) and if you will put me in that car I will charge you with kidnapping. And the charge will not be against the police but you," she could be heard telling the cops.

Meanwhile, an FIR against Union Minister of State for Home Ajay Mishra's son Ashish Mishra and several other people has been filed about the Lakhimpur Kheri violence.

Congress leader Deepender Hooda has also been allegedly being manhandled and pushed by the Uttar Pradesh police.