Following the global success of Squid Game, everyone appears to be gushing over actor Anupam Tripathi, a Delhi native. 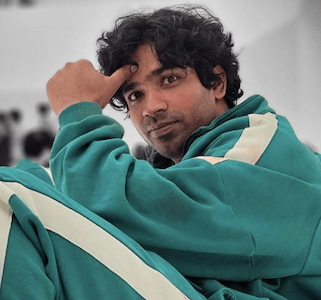 Squid Game, a Netflix-backed Korean series, is trending on social media for its bizarre notion of 'gambling on life.' It has become one of the most popular series, and it continues to rise in popularity as more people watch and suggest it. It depicts a group of people who risk their lives for children's games, with the winner receiving a financial reward of millions of dollars.
Also Read: Netflix to edit scenes with real phone number in 'Squid Game'

ANUPAM TRIPATHI'S CHARACTER IN SQUID GAME
Meanwhile, an Indian actor known as Ali Abdul or Player Number 199 has piqued the interest of the local public. After his part in Squid Game, Anupam Tripathi has gained international acclaim. He portrays a Pakistani immigrant who is obliged to participate in the game due to circumstances. Not just for his nuanced performance, but also for his portrayal of Ali, Anupam has received a lot of positive feedback on social media. He presently has over 2.5 million Instagram followers and appears to have risen in popularity as a result of this bizarre project.
Also Read: Upcoming web series which you may binge-watch, check the list here
"On September 17, the show (Squid Game) premiered." "I still remember September 17, 2021, 4 p.m., my life was OK, but after 5 p.m., it got big, tremendous — suddenly everyone started texting me, and it was 'Ali,' 'Ali,' .Anupam told Variety.
Who is Anupam Tripathi?

WHO IS ANUPAM TRIPATHI ?

Anupam is a Delhi native who came to South Korea in 2010 to seek further education. Since then, he has been living in the country and working in theatrical shows, television programmes, and films. In reality, Anupam played a minor role in the 2014 film Ode To My Father, which was adapted in Hindi as Bharat (2019) starring Salman Khan and Katrina Kaif.
Anupam was mostly interested in music until he happened upon a Spartacus theatrical play. In the show, he portrayed a slave and then joined the Delhi-based Behroop theatre group, where he stayed from 2006 until 2010. Shahid Anwar, the late playwright, was his tutor there.
He intended to go to the National School of Drama, but due to a change of plans, he was accepted on a scholarship to Korea National University of the Arts' acting programme. In just two years, he learned Korean. Following his graduation, Anupam appeared in the films Ode to My Father, Descendants of the Sun, and Space Sweepers. Following that, he sought for and was awarded another scholarship to pursue a master's degree in acting at his alma university.
Anupam told Variety that he is considering doing additional work in South Korea, especially in other dialects. He also speaks English and Hindi fluently. "I've only done theatre in India, but I'd like to see and experiment with what I can accomplish in my own tongue." I would if I could.
I'd want to be able to express myself there. "Performing in front of my own home and audience - this is my ultimate dream," Anupam said.
Anupam claimed he researched BBC documentaries, YouTube movies on Pakistani migrants, and spent time with Pakistani friends in South Korea to study the intricacies of Urdu-language speech in order to get into the skin of his Squid Game character Ali.