Who is Sanket Mahadev Sargar? From working at a tea stall to winning Silver at CWG 2022 in weightlifting; Read

Despite being a national record holder in weightlifting, Sanket used to work and help out his father at a family-owned tea shop 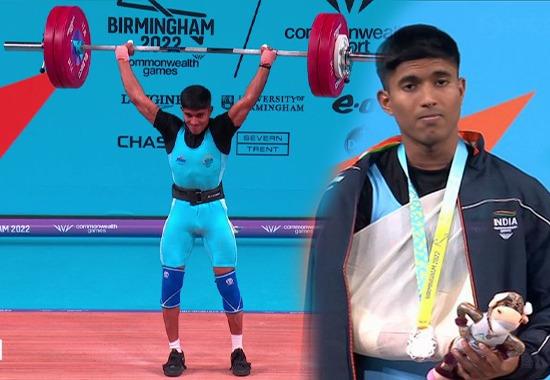 In a proud moment for India, Sanket Mahadev Sargar on Saturday scripted history and won the first medal for Team India at the ongoing Birmingham Commonwealth Games 2022.  Sargar Sanket won silver in weightlifting by lifting a combined weight of 248 kg in the 55kg category and lost the gold by just one point in his valiant effort. Notably, Sanket did not give up or hold himself back after he injured his right elbow while lifting 139 kg.
However, Sanket continued his hunt for the gold to make his country eternally proud, however, due to injury he had to be satisfied with Silver at Commonwealth Games 2022. While Sanket decided to g for the third attempt, commentators stated that the weightlifter's decision might be career-threatening. With Sargar Sanket bagging silver and opening India's account at CWG 2022, fans are querying who is he and his background:
Who is Sargar Mahadev Sanket?
Reportedly, Saket Sargar once was unable to find a job. Despite being a national record holder in weightlifting, Sanket used to work and help out his father at a family-owned tea shop and food stall in Sangli, Maharashtra. Sanket Mahadev Sargar was born in Sangli in Maharashtra. Sanket Mahadev Sargar represents India in the 55kg category at the CWG 2022 in weightlifting. Sanket also holds a national record when he lifted 113kg in the men’s 55kg snatch category. It is pertinent to mention that Sargar's sister Kajol is also a weightlifter. Last month, she became the first gold medallist of the 4th Khelo India Youth Games.
PM Modi and India hail Sanket Sargar over his CWG 2022 silver medal win
Also Read: CWG 2022: Easy openers for Sindhu, Srikanth as India whitewash Pak 5-0 in mixed team badminton