24-years old, Niharika is a resident of Bhatigaon village in Raha, Assam. She has a six-year-old son. Her father-in-law, Thuleshwar Das is a betel nut seller. 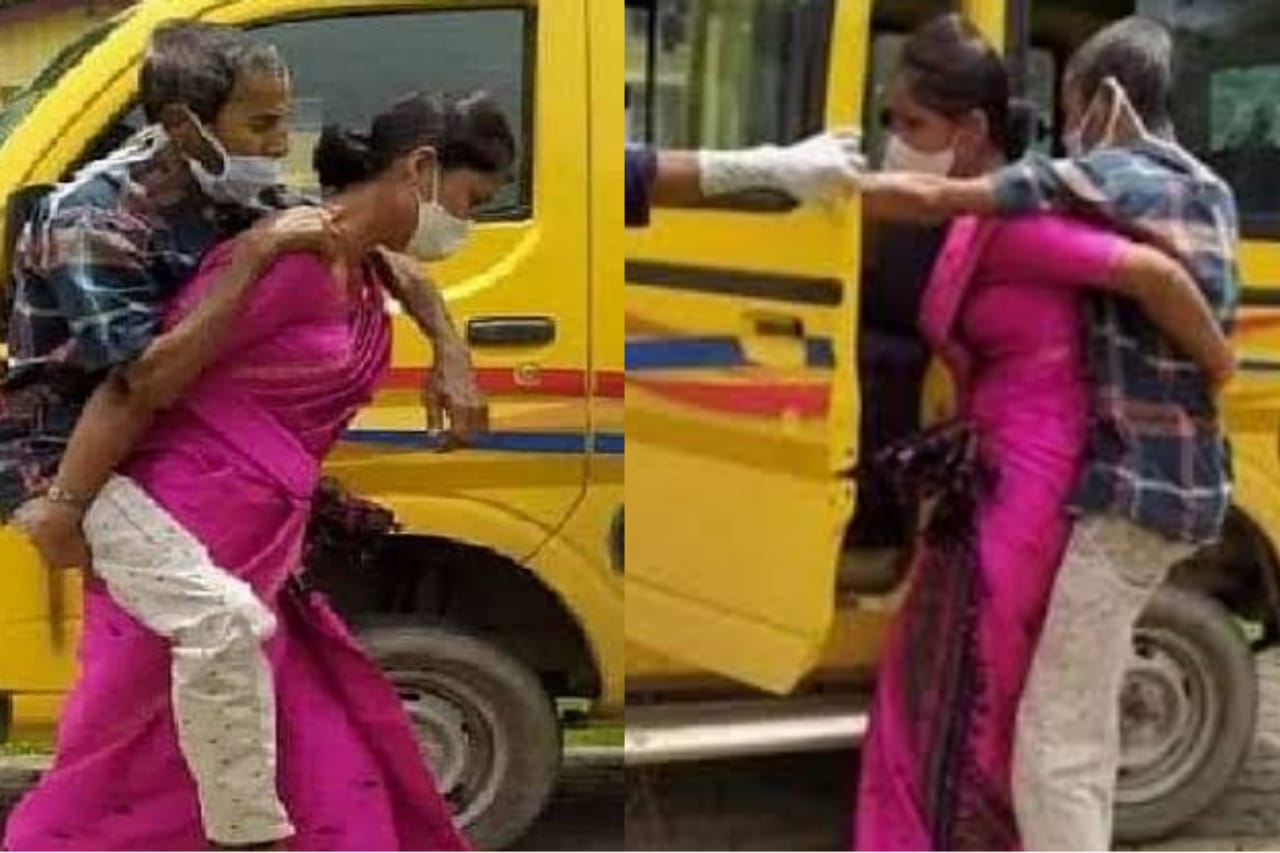 Niharika Das, a resident of Nagaon, Assam who carried her covid positive father-in-law on shoulders to a nearby Raha health centre for treatment,

was celebrated on Twitter last week as her photo went viral. Netizens hailed the courage of the woman and in the meantime expressed disappointment over dying humanity as many clicked pictures but none came forward to help.

Meanwhile, after carrying her covid positive father-in-law on her back, the woman also contracted the virus.

24-years old, Niharika is a resident of Bhatigaon village in Raha, Assam. She has a six-year-old son. Her father-in-law, Thuleshwar Das is a betel nut seller.

On June 2, Niharika’s 75-year old father-in-law Thuleshwar Das started showing symptoms of Covid19. She then arranged an auto-rickshaw to take him to the nearest community health center in Raha town. There was some distance between their home and a parked vehicle. The road to their house is not motorable. Her father-in-law was too weak to walk and her husband Suraj was away for some job reasons. That’s when Niharika decided to carry her ailing father-in-law on her shoulders.

“My father-in-law was too weak to stand up. My husband was away at work in Siliguri, so I had no choice but to carry him on my back and take him to the vehicle parked at a distance,” said Niharika.

But the struggle did not end here. At the community center, Thuleshwar tested positive for covid19, witnessing his critical condition the authorities suggested taking him to a Covid hospital 21 km away in Nagaon.

“So we had to call for another private vehicle. There was no ambulance or stretcher, so I had to carry him to the vehicle again. People kept watching but no one came forward to help. I had to gather a lot of physical and mental strength to carry him,” said Niharika.

When they arrived at Covid hospital, the authorities said that they were not equipped to deal with Thuleshwar’s condition and referred him to Nagaon Civil Hospital. There too, Niharika had to carry her father-in-law up to three flights of steps. “I think I must have carried him for 2km in total that day,” she added.

Amid her struggle, someone clicked her picture and posted it on social media. The photo went viral and social media platforms were filled with appreciation for her. She had no idea about the picture until a local new channel approached her for an interview.

Thuleshwar’s condition worsened, and he and Niharika were shifted to Gauhati Medical College and Hospital on June 5, where he succumbed to the virus on Monday night.

“I was very close to him. I showed him our photos and he was shocked and worried what would people say. I assured him that people are praising us. He joked and asked me where I got the strength to carry him,” Niharika said.