The accident took place due to the negligence of the truck driver. He fled from the spot immediately leaving the truck on the road. 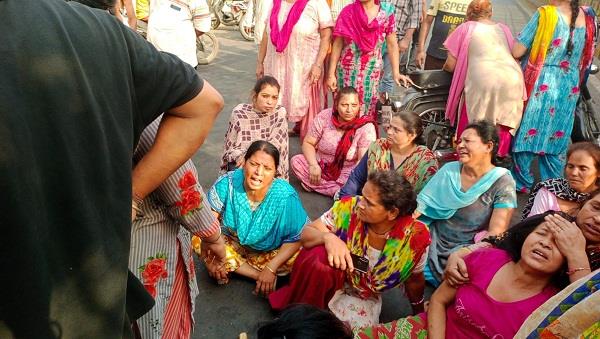 A major accident took place at Football Chowk Jalandhar today. A speeding truck rammed into a family riding a motorcycle on the way to Chikchik House at Football Chowk early in the morning. After this, the truck driver, instead of applying the brakes, crushed the woman on the motorcycle who fell on the road.
The woman got stuck with the truck. But the truck driver did not apply brakes. He dragged the woman along for about one and a half to two hundred meters. The woman was torn to pieces in the accident. The woman died on the spot.
The deceased was identified as Neha Bhardwaj, a resident of Basti Sheikh's New Sant Nagar.
According to the eye-witnesses, tipper truck was at over speed and the driver suddenly turned it. The driver was feeling sleepy due to which this incident took place. He fled from the spot immediately leaving the truck on the road.
Also read: Batala: Stubble burning turns life-threatening; School bus caught fire, 7 students badly burnt
The police team reached the spot after receiving the information. A case was registered against the truck driver. Due to the accident, a large crowd gathered there. At the same time, the victim's family has blocked the road and is demanding justice from the administration.