Women can’t be ministers, they should give birth: Taliban spokesman

Taliban spokesman stated, “A woman can't be a minister, it is like you put something on her neck that she can't carry.” 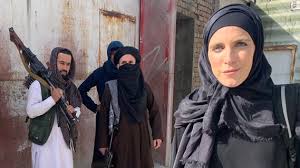 After capturing all Afghan provinces, the terrorist group is showing its true colours as the Taliban is quashing all the possibilities of women being included in the government. Recently, a Taliban spokesman said that women should restrict themselves to giving birth to a child. He further said that women must not be included in the cabinet as ministers.

This statement is released by the ‘new’ Afghan government amid the protests conducted by the women against the rule of the insurgent group.

The Taliban spokesman, Sayed Zerkullah, during an interview with Tolo News, reacted to the protest and said, “A woman can't be a minister, it is like you put something on her neck that she can't carry.”

He further said that women should restrict themselves to giving birth and must not be included in the cabinet as ministers. He added, “Women protesters can't represent all women in Afghanistan.”

When the Taliban seized Afghanistan, they said that they would form a moderate government and have assured to respect rights of women. They also vowed to give government jobs to women. But their actions are different from their words.

They are restricting women and making everything similar to their last rule in Afghanistan from 1996 to 2001, where women could not work, girls were not allowed to attend school and women had to cover their face and be accompanied by a male relative if they wanted to venture out.

After being shut out from the Taliban’s new government, women increased pressure on Afghanistan’s new rulers with several protests. Videos and pictures of the protests showed the women chanting, “Long live the women of Afghanistan.” Some were seen holding placards that read, “No government can deny the presence of women” and “I will sing freedom over and over.”