Swami Prasad Maurya, Yogi's minister, has joined the SP. Three more MLAs have resigned from the BJP and  Nand Gopal Nandi has remarked, "This is political suicide." 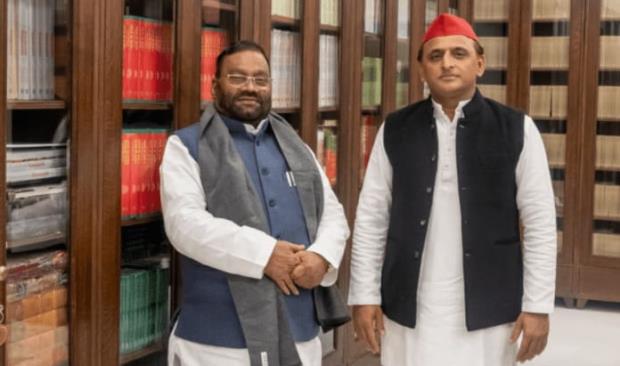 Before the assembly elections, the BJP suffered a major setback. Yogi Government Minister Swami Prasad Maurya resigned from the Cabinet on Tuesday.Shortly after, MLAS Brijesh Prajapati , Bhagwati Prasad Sagar, and Roshan Lal Verma left the BJP in support of Swami Prasad. The resignation of Bhagwati Prasad Sagar, on the other hand, has not been made public.
Now , in addition to Swami Prasad Maurya, four more MLAs , including Minister Dharam Singh Saini , are talking about joining the SP. Akhilesh Yadav said on the stand in the BJP camp that the combination of everyone in the twenty-two will lead to a "fair" of positive politics. For the first time in history, the BJP will be defeated. Swami Prasad’s visit to the SP, said minister Nand Gopal Nandi, says this a political suicide.
The resignation of Swami Prasad is delivered to the MLA at Raj Bhavan
Swami Prasad emailed his resignation, and Shahjahanpur MLA Roshan lal Verma delivered a hard copy of it to Raj Bhavan. In his resignation letter, he highlighted the government's indifference to the poor, farmers, unemployed, young, and small and medium-scale traders as the cause for his departure.
Those who consider themselves to be great guns, according to Swami Prasad, will be buried in the 2022 elections. Maurya was in charge of four mahakamas. In the cabinet, he was the minister of labor, services, and coordination. Sanghamitra Maurya, his daughter, is a BJP Member of Parliament from Badaun.
Nand Gopal Nandi, the civil aviation minister, has launched a strong onslaught on Swami Prasad's resignation. Swami Prasad Maurya's joining the sp, he observed, is like annihilation, the black opposite of intelligence. For swami prasadji, akhilesh yadav's sinking boat journey will show to be a fatal decision, similar to political suicide. The bjp is the name of a political ideology that prioritizes the nation.
The reason for Maurya's resignation was stated
Maurya penned in his resignation, "Hon'ble governor, as minister of labour and services and coordination in the cabinet of chief minister Yogi Adityanath ji, he has discharged the responsibility with great concentration even in the face of adversity and ideology. But, I resign from the cabinet of uttar pradesh because of the gross neglectful attitude of dalits, backward, farmers, unemployed youth and small and medium scale traders. ''
samajwadi party national president akhilesh yadav shared a photo with swami prasad maurya after he resigned as a cabinet minister and wrote:
"A warm welcome and congratulations to shri swami prasad maurya ji, a popular leader who fought for social justice and equality and all other leaders, workers and supporters accompanying him in the SP!"
Hasty decisions, according to Keshav, are frequently incorrect
Swami Prasad's resignation, according to deputy chief minister keshav maurya, was a rushed move. "I don't know why the renowned swami prasad maurya ji has resigned," he added. 'Hasty decisions are frequently proven to be incorrect.'
On September 21, 2016, Swami Prasad joined Bjp
After announcing in front of the media, swami prasad maurya left bsp in the assembly chamber in Tapati Dupharia on June 22, 2016. He subsequently established the democratic Bahujan Manch and began campaigning in the areas. On September 21, 2016, he joined the BJP. The Bjp was counting on a winning candidate to win the 2017 elections at the moment.
However, swami prasad maurya has recently rejoined the sp and left the bjp. Experts say that when keshav prasad maurya was in the bjp, swami prasad maurya was not given the same priority. The more important they become in bsp or now sp, the more important they become. Mauryas and kushwahas account for 8% of the population. Swami prasad maurya is thought to have a strong grip on them.
Also Read: In Points: No delay in 2022 polls, EC to visit homes of unwilling, elderly & handicapped voters; says CEC Sushil Chandra
Despite the fact that swami prasad maurya has already joined the sp, akhilesh yadav had repeatedly encouraged him to join the sp as a cm. Mayawati and yogi have also received ministerial positions in the government, with swami prasad maurya becoming an MLA five times. He also served as the opposition's leader during his time in the opposition.