Javed was a wrestler during his graduation days at Lyallpur Khalsa College, Jalandhar, and due to a shoulder injury, his passion for wrestling took a backseat. 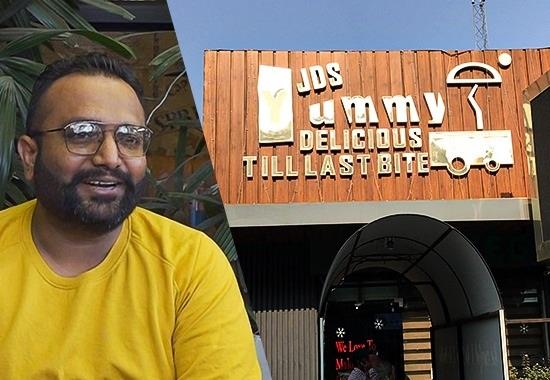 From trash to pan, from pizza delivery boy to setting up a 3000sq ft restaurant, from dreaming to finally owning a Harley Davidson, the journey of Mohammed Javed hasn't been easy.

Javed was a wrestler during his graduation days at Lyallpur Khalsa College, Jalandhar, and due to a shoulder injury, his passion for wrestling took a backseat.

It was after this, his interest in cooking took a front seat and pushed him to apply for a Pizza delivery job. And that's where it all began! Soon he became a cashier and then he entered into assembling line which kept him busy for about four years.

He then switched to working in malls, also he used to travel to different cities on daily basis and all this ultimately resulted in an unstable lifestyle. In the meantime, his Visa too got cleared for United Kingdom.

He went to UK and there he worked for a construction firm and then switched to working as a crew member at a restaurant, where he gradually rose through the ranks until he became the head chef. He returned to India after two years and started his own business in 2010.

However, the road was not without its bumps. After five years of stepping into the restaurant business, Javed saw no growth, it was just a flat line. His one year electricity bill was pending and at that point he felt like giving up. He states the clause “Behind every successful man there is a woman.” He believes his mother was that woman in his life.

He has a very upbeat attitude toward his clients, and he pays close attention to each criticism and makes every effort to rectify it. He said “Client teaches us and helps us in gaining and developing at every stage.”

He is the epitome of how hard work pays off. His staff never abandoned him, even on his lowest days. He now has a staff of 48 people who motivate him every day, he said.

During his school days, his friends had the basic bicycles but his father gave him a Ranger bicycle. He saw the movie ‘Terminator’ in which he saw Arnold driving Harley Davidson.

And from there he got stuck with the dream of owning a Harley Davidson one day. He finally bought it and on that day he realised “Business acha chal raha!”

He even got into catering business, where he got in touch with Ramesh Sharma, whom he considers his mentor. He learnt a lot of things from him and his mentor treated him like his own son. He has his mentor’s image on the restaurant wall and the whole wall is beautifully painted with his own journey.

Every time you walk into 'Yummy Delicious till last bite,' you will experience the same taste reason the dough used by restaurant is prepared by Javed himself. Also at present, his entire family is involved in his business , he said.

When asked why he stands out from other restaurants, he quoted three main factors: value for money, quantity, and hygiene.

He is a very humble gentlemen and a person who is grateful to every individual who is part of his journey. People often say to him “Ye toh raaton raat star ban gaya” but this is his real story.

Also checkout Jalandhar's other superstars: Get the Netflix like party in town with Ant-Eye!